COMPLETE COVERAGE OF THE 2014 LEGACY BUILD:

Volunteers explain why they serve others at the Millard Fuller Legacy Build.

Q&A with President Snell on the state of the build with one day to go.

Louisville a huge success; Americus to host next Legacy Build in September 2015.

WRAP-UP STORY: Volunteers deliver hope where it is badly needed.

Want to download high-resolution photos from the build that are suitable for printing? Click here for the galleries!

Legacy Build 2014 Big Success-See you next year in Americus, GA

The Millard Fuller Legacy Build named in memory of Millard Fuller, founder of Habitat for Humanity and The Fuller Center for Housing is an annual, internationally-recognized week of building that brings attention to the need for simple, decent and affordable housing.

During 33 years of building houses Millard Fuller helped over 300,000 families know the joy of having a decent house to call their own. From Louisville Fuller Center for Housing, in Louisville, Kentucky, our host for this year’s Legacy Build, to cities and villages around the world Fuller Center covenant partners worked to provide families with a decent place to live to support Millard’s vision. 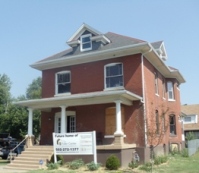 Build Information: Louisville, KY-Louisville Fuller Center for Housing host to the Millard Fuller Legacy Build 2014 renovated six homes during the week of April 6-11, 2014 in the Shawnee neighborhood of Louisville, Kentucky.This neighborhood located in the western portion of the city of Louisville, KY was the site for hosting volunteers. Thank you to Spirit of Love Church, Portland Memorial Missionary Baptist Church and many other community partners for allowing volunteers to use their facilities.