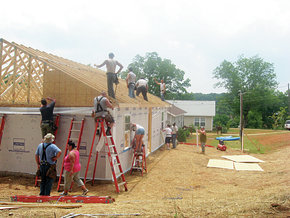 LANETT, Ala. – More than a year after the unexpected death of the Chattahoochee Fuller Center founder, a neighborhood is beginning to grow here.

As volunteers hammer away on a new Fuller Center house, the neighbors – many of whom are homeowners thanks to the same program – watch from their own yards and porches. Kiddie pools dot the yards along with newly planted flowers and sets of patio furniture.

The volunteers building the houses believe that Millard Fuller, who founded the Fuller Center for Housing five years ago, would love the scene.

“We met Millard before he died,” said Amy Stuck of Middleburg, Pa. “We have several of his books, autographed.”

Stuck and her husband, Larry, and two of their three children made the trip to Lanett with about 25 other members of their church this week to work on the new house. They practically are regulars here, volunteering since 2007.

“We like the people down here, and they treat us so well,” she said.

In fact, West Point City Councilman and Fuller Center project manager Darren Kelley has tried, without success, to get the Stucks to move here. The parents are up for it, but their children don’t want to leave their home.

Kelley can’t argue. The whole point of the Fuller Center is to stress the importance of “home.” The lot where the new house will be completed, and where five other houses already stand, was once “home” to nearly 40 shotgun-type houses that were demolished to make way for new homeowners. 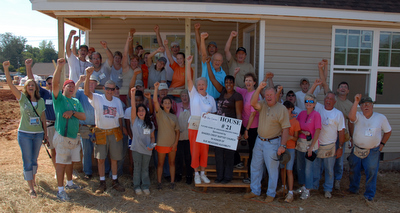 The house, which began construction Monday, should be mostly complete by the end of the week other than punch-list items. The new owners will move in by mid-August, Kelley said. It’s the 25th new house built by the Chattahoochee Fuller Center here; 25 more have been rehabilitated. The house is being done as part of what is now an annual “legacy build” celebrated in September, to mark the anniversary of Millard Fuller and his wife, Linda. The first legacy build kicked off in September with former president and longtime Fuller supporter Jimmy Carter helping to rally the volunteers.

The Stucks say they didn’t know Fuller when he was with Habitat for Humanity, which he also founded, but wound up on a Fuller Center project when a mission trip to Bolivia fizzled out. Someone pointed the church – Neimonds Independent Church in Richfield, Pa. – to the Fuller Center.

While the first group to come to the Alabama work site was small in 2007, interest has grown. The church now “pre-builds” walls in Pennsylvania with between 40 and 50 volunteers who can’t make the trip but still want to help.

“We see the positive changes we’re making,” Amy Stuck said. “And we get treated well every time we come here.”

On one of their first trips, their van, which was experiencing mechanical trouble, was taken away – the Stucks don’t know where – and fixed at no charge. The same thing is happening this year, their son’s truck barely made the trip but is getting attention somewhere in the Valley area as the volunteers give attention to the new house.

Nearly 100 houses will be built as part of this year’s Legacy build. The home will be occupied by Mattie Murphy and her daughter, Jennifer, who is disabled as a result of oxygen deprivation during a heart attack three years ago. She uses a wheelchair and communicates via an alphabet sheet, said Kim Roberts, Chattahoochee Fuller Center family partnering coordinator.

“This is an amazing family that has made the best of life with what they have been handed,” Roberts said. “Jennifer is so excited and clearly understands everything that is going on. She will be on-site during the mornings of the build to meet all the volunteers.”

Kelley said the home will be dedicated with the Murphy’s and volunteers Friday.