When volunteers began arriving at the site of the Millard Fuller Legacy Build in McDonough, Ga., early Monday morning, the temperature was a cool but not chilly 61 degrees. By afternoon, it was about 82 degrees in clear sunshine.

In other words, it was about as close to perfect weather as you can get for such a build. And the forecast through Friday features a whole lot more of the same — lows in the low 60s, highs in the low 80s and zero percent chance of rain. While rain is just as welcome in Georgia as it has been in many other dry parts of the country, it is not a friend of blitz builds. 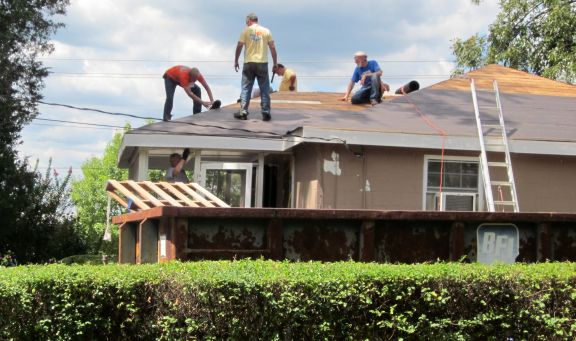 Fuller Center for Housing President David Snell just returned Saturday from a week at the Legacy Build site in Peru, La Florida, an arid community in the mountains where it hardly ever rains … except for a couple days during last week’s build.

“On those two days, it was a drizzle all day long, and they called it torrential,” Snell said with a laugh, adding that they’re moving into springtime in Peru, and highs and lows were in the 60s nearly all week. “They never get rain, so we brought them rain. Everybody was just delighted, except for those of us who had to slog through 15 miles of mud to get to the houses. It wasn’t as cute for us as it was for the local folks. Villagers were in the streets. But it was bizarre because they almost never get rain.”

Meanwhile, the brutally hot and oppressive Georgia he left behind last week was nowhere to be seen Monday. And being in the northern half of the state above the fall line, there are not even those annoying South Georgia gnats to deal with.

“So here we are in Georgia, going into fall but not there yet, and this can be a really nasty time of year here,” he added. “And it feels like fall!”

“It’s supposed to be cooler in New Jersey, but we’ll suffer,” Neil Brown, the house leader from the New Jersey Pines Fuller Center, said with a smile. His covenant partner intends to be part of a repair blitz next summer that could involve up to 100 homes, and he would be happy to have the same weather then.

Of course, how wonderful the weather is in McDonough right now may be relative to where you come from.

“For September up our way is the start of fall, so the days are just about perfect,” said Ashley Eia, of Pennsylvania. “But down here, it’s a little bit warm.”

But Orlando’s Samantha Zaino, an EMT, saw it a little differently.

“The weather is absolutely gorgeous,” said the effervescent part-time worker at Disney while taking a break from playfully admonishing anyone on site who did not appear dirty enough. “It’s beautiful, perfect and low 80s, and in Orlando it’s hot, humid and 95 degrees. This is perfect. And I’m excited there’s no rain. Yea!”

Volunteer Jill Miller calls both Colorado and Mississippi home, so she has seen all kinds of weather extremes, including outer portions of Hurricane Isaac a couple weeks ago. She has had her fix of rain for now.

“It’s pretty nice, but it’s pretty humid,” she said of the weather in McDonough. “But with Isaac, it was real humid. It was wet. Between Katrina and this one, I think that’s enough. One’s enough. Two’s definitely enough.”

Snell said the weather may have had something to do with the way the 80-plus volunteers hit the ground running Monday.

“They’re doing a great job out here today,” Snell said, adding that major repairs such as those on the U.S. side of the Legacy Build can be almost as time consuming as a new home build. “There’s actually a lot to be done. Everybody’s busy.”

View many pictures from this year’s Legacy Build, with new ones posted daily, by clicking here.