Old-timers in Atlantic City recall two main storms before Superstorm Sandy — the Great Atlantic Hurricane of 1944 and the Ash Wednesday Storm of 1962, which is considered one of the 10 most devastating storms to hit the United States in the 20th century.

In March of 1962, an unusual combination of meteorological factors generated a deadly storm that sat off the New Jersey shore for three days — generating heavy rain, strong winds and storm surges that flooded Atlantic City. Because it stalled offshore through five high tides, the flooding was extensive and prolonged. At least 40 people were killed in mid-Atlantic states, which suffered hundreds of millions of dollars in damage. 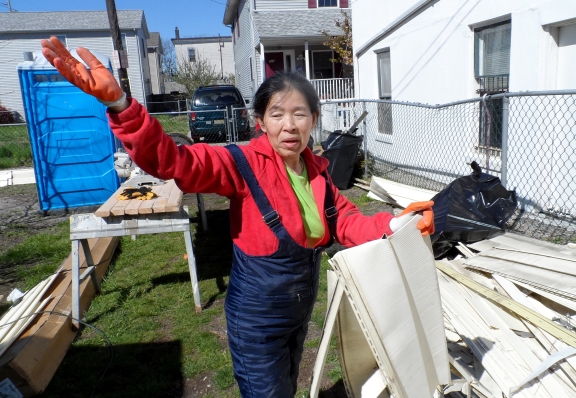 Ronnie Downing lived through that Ash Wednesday Storm but does not recall much about it as he was just 4 years old. But he said there is a photo of him being loaded into a boat by National Guardsmen. Knowing how bad the flooding was from that storm, there was no way he was going to ride out Superstorm Sandy. But he practically had to drag his wife away from their Tennessee Avenue home.

“In all the 20 years that we’ve lived here — this was my parents’ home — we never got water in this section of the city,” said Downing, whose home is one of 21 being repaired by more than 250 volunteers who are working in Atlantic City during the 2013 Millard Fuller Legacy Build with The Fuller Center for Housing. “But when the weather forecast showed us what could happen from the storm surge, I tried to convince my wife that it was going to be different this time. I booked a hotel a long way from here, but she did not want to go and fussed at me all the way there. … After she realized what happened, she finally stopped fussing.”

He found out just how bad it was from a neighbor who rode out the storm.

“I called my neighbor, and she said the water came in from east in a wave, like a tsunami,” Downing recalled Thursday. “It came in and pounded against the house, and then the water came in from the west side of the city and pounded against the house. She said it continued to rise and was black and really scary. It just kept rising higher and higher. For three days, it sat on this land without going down. She said it just swirled around.”

Legacy Build homeowner Valerie Watson did not have to call to see if her North Indiana Avenue home was damaged. She was trapped in it as the water rose.

“It was scary. It was very scary,” she said. “The water got real bad around nine or nine-thirty, and that’s when we called the city to see if someone could come get us because when it started coming up my steps, that’s when we got scared. The city said they had ceased sending cars over here because they would get stuck and not be able to get out. So we had no other choice but to get on our knees and start praying.” 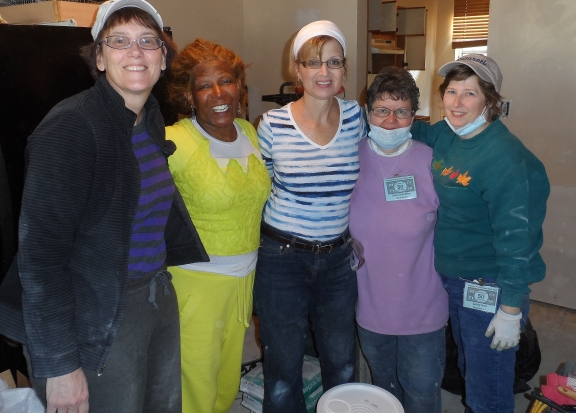 When Atlantic City was placed under the first mandatory evacuation in its history due the threat of Hurricane Irene in 2011, Watson stayed on the island. She said that because Irene mostly spared Atlantic City any damage, people became complacent.

“It wasn’t really that bad,” she said of Irene, which she slept through in the safety of a seventh-floor City Hall office where she worked. “This time, I figured, hey, Irene wasn’t that bad, so I’ll stay.”

Like Watson, Legacy Build homeowner Ronald Dunn rode out Superstorm Sandy. Like Downing, Dunn also rode out the Ash Wednesday Storm of 1962. Unlike both of them, he also rode out the Great Atlantic Hurricane of 1944. He rode out the three major storms in three different Atlantic City houses, the first one on South Carolina Avenue at the age of 5.

“The beach patrol were rowing their boats down the main corridors of Atlantic City,” he said of the 1944 storm. “We lived in an upper apartment, so we didn’t get much damage. But a lot of people did, but nothing like Sandy.”

In February of 1962, Dunn got out of the Army, but the Ash Wednesday Storm made for a rough homecoming.

“We had a terrible storm,” he remembered. “The water at our house on Baltic Avenue came through the front door, to the back door and out. But out of all of that, no one really got hurt, and the damage was not as bad as with Sandy. Sandy was the worst thing that the city had ever seen. We have never seen anything like it, and I hope that we never see anything like it again.”

But Dunn, Watson and Downing have been all smiles this week as they have worked alongside volunteers who have traveled from near and far to serve Atlantic City residents who fell between the cracks of government and other aid efforts.

“It’s overwhelming,” Downing said. “People coming from all over the country to help, that’s a story of ultimate coming together. It’s the spirit of God. It just makes your heart boil over with joy.”