It was a bittersweet day here at the headquarters of The Fuller Center for Housing. It was communications specialist Leah Gernetzke’s last day. Leah will be working as a volunteer with Jubilee Partners, which sprung from Koinonia Farm much like The Fuller Center did.

Jubilee is run by Don Mosley, who has a passion for peace and for helping people, especially those who have come to the United States from other countries seeking a better life for their families.

Leah will be remembered for many things around here. For being the coldest person to ever set foot in Louisiana … even though she’s from Wisconsin, something she was reminded of about 27 times during the 2011 Legacy Build as she shivered underneath her hood and scarf while holding coffee with her gloves. For a flat tire that made her late for her own birthday party at the office … leading many young men to nearly injure themselves rushing to her aid. But, mainly, for being so quietly effective at doing so many different things. 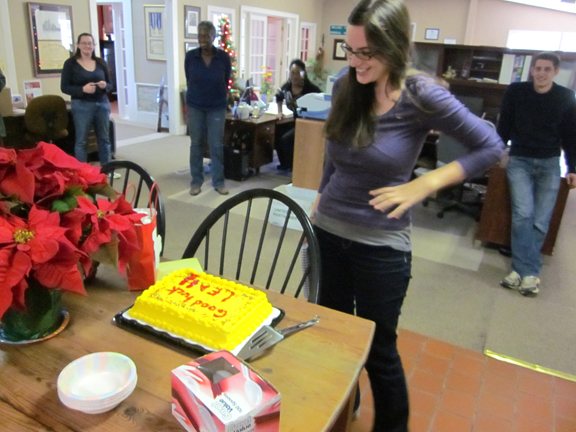 In the year she has been a communications specialist here (after a short stint in the newspaper business with which I’m so familiar), she has produced loads of videos, photos, stories, emails and social media posts. If you’ve visited our website more than once, you’ve likely seen more of her work than you know.

If you’ve had the joy of working with Leah often here at headquarters or occasionally out in the field, you know that Leah works with a quiet confidence and treats everyone with respect. In the six months I’ve been here, I’ve yet to hear her speak ill of anyone. And I’ve definitely never heard anyone speak ill of her. Even if she wasn’t as talented as she is, we’d have kept her around just because she’s so nice.

One of my most important duties here today was to get 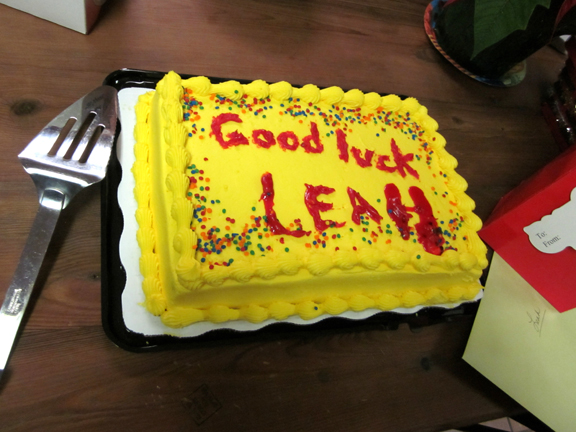 Leah’s cake. Easy enough. But I wanted to add a real personal touch by decorating it myself. Which I did. And as you can tell by the expression on Leah’s face, I did an interesting job with my tube of icing. I like to make a statement.

If I weren’t so distraught at losing Leah’s services, you might even be able to read what I wrote!

Good luck, Leah! We will miss you!

p.s.: I asked Leah to share her favorite story and video she has done for us. I’ve shared the links to them below.