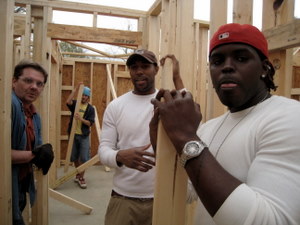 Throughout the semester students in the Construction Technology and Management program learned the principals of construction. However, this was the first time they got to take what they learned in the classroom and apply it to the real world. In two weeks the students plan on building two houses as part of what Linda Sonnier, program director for the CTM program calls a house blitz.

"In our methods class we are learning about wood frame. [Students] learn more today about what wood frame is than I could teach in two weeks worth of classes. You have to do it to be able to learn it," said Sonnier.

"It’s a win-win for us and the [college]. The students get the hands on experience and we get the volunteer labor we need to facilitate our ministry as far as building houses for those in need," said Jeter.

The BPCC students not only worked on two houses, but they also worked alongside the future occupants. Continue reading>>

Learn more about how to get involved in Shreveport…