Marti Lamar’s home on Churchman Avenue will be renovated as part of the Millard Fuller Legacy Build 2010. Her story was submitted by Kipp Normand from SEND-Southeast Neighborhood Development, a local partner of the Central Indiana Fuller Center for Housing and the legacy build. 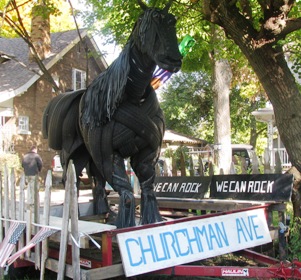 Marti Lamar is a star pupil at the school of hard knocks. As a kid she had more responsibilities than most adults. She helped her parents care for the rental properties that provided their family with a livelihood. Marti learned fast. She learned how to fix things and how to deal with some very tough people.

"I used to go around with my Dad fixing sinks and collecting rent," she says. Everyone wanted things fixed, but nobody ever wanted to pay, and even fewer people seemed to care about the places in which they lived. "We would paint the walls and fix the apartments up nice and they’d just tear them right up again."

That was Marti’s childhood. "I learned a lot about the human condition before I was very old," she says.

Marti says she has seen a lot of misery and sometimes it makes her heartsick. She feels compassion for the people around her and she has a history of standing up in their defense. "I just hate to see anyone mistreated, especially children and animals." Marti Lamar is one tough cookie, but she has a big soft heart. She rescues people, stray animals, and even derelict houses.

Marti’s parents bought the big house on Churchman Avenue in 1973. The house was built in the late 1800s as the country home of a prominent bank executive, but that was ancient history. When Marti’s parents acquired it, the house had suffered through decades of tiny apartments and renters. Marti’s family fixed up the apartments and tried to improve things, but they were discouraged by people who did not respect the property, or the neighborhood. Years later, after Marti’s parents were gone, the house on Churchman Avenue became known as the "Haunted House." Then Marti moved in and started to work her kind of tough magic.

Marti knew the neighborhood. She knew the people who were struggling to make it and she knew the people who were causing problems. She started fixing up the "Haunted House" and eventually its formerly bleak exterior turned into a positive, even encouraging presence on the street. Marti spent time with her neighbors. She helped people repair their houses, and mourn the tragedies that occurred all too frequently on Churchman Avenue.

The street began to heal. Marti credits a former neighbor, Jane Mullikin, for turning the tide.

"When she moved in and started walking her dog through the neighborhood, people noticed and said, ‘now this is something different,’" Marti says. She says it was that little white-haired woman who was "either really brave or really stupid" who walked up and down the street as though she lived in a normal neighborhood who really brought the change.

The residents of Churchman Avenue took heart. They banded together and started to hold regular meetings at Jane Mullikin’s house and gradually they began to take control of their neighborhood. They called the cops. They reported crime and suspicious activity. They cleaned up the alleys and the derelict properties. Collectively they said: "We are not going to take this anymore."

They no longer felt helpless. They built a strong and active neighborhood association appropriately named WE CAN (West and East of Churchman Avenue Neighborhood).  Eventually, Jane Mullikin’s health required her to move away, but Marti and the rest of WE CAN continued to persevere. They are out there still, working that tough magic.

Marti Lamar doesn’t have a lot of spare time. When she’s not fixing things or visiting people who really need the kindness of a friend, she makes art out of the more interesting junk she finds in the alleys, and she plays music. She has formed a band comprised of friends and neighbors. They get together to turn up the volume and lift each other’s spirits. As Marti likes to say, "WE CAN ROCK."