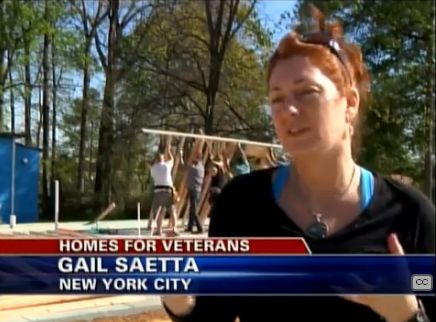 (KMSS-TV) The Fox television affiliate in Shreveport talks to some of the volunteers at the 2013 Veterans Build, including musicians from Los Angeles and Gail Saetta. Gail is affiliated with One Small House and is one of the reasons the build came to be supported by Roger Waters, founding member of Rock and Roll Hall of Fame band Pink Floyd, the station reports. After seeing Waters’ performance of "The Wall" concert/experience, she contacted him, merely hoping for some autographs or items that could draw funds in an auction. To her surprise, Waters contacted her and said he wanted to build homes for veterans. She found the perfect partner for such a build in the Northwest Louisisana Fuller Center for Housing, to whom Roger Waters gave $300,000 for the build through the Bob Woodruff Foundation.

Gail has been in Shreveport this week volunteering on the project. "This is too good to be true because it puts together a community," she told the station. "It’s a holistic approach. … It’s actually building a community where veterans can support each other and help each other and grow and have healthy lives."

Click here for the complete report by KMSS-TV’s Annie Anderson.