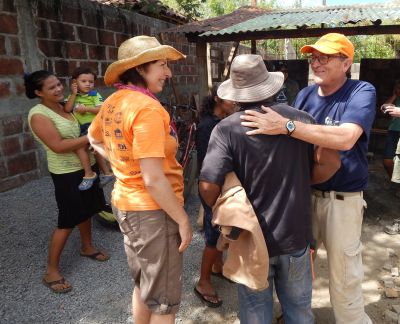 January is usually a fairly quiet month for The Fuller Center with winter conditions curtailing a lot of projects, especially in the U.S. But there is a lot of work being done in the field by good-hearted folks willing to brave the cold.

And for those of us who can’t handle the cold — including myself as I’m a lifelong Georgia who thinks any temperature under 50 is "freezing" — there are all kinds of international hotspots where The Fuller Center stays busy.

One of those is Nicaragua, where I was fortunate to spend a week in January documenting the work of the covenant partner while being part of a Fuller Center Global Builders team led by none other than our president David Snell and several members of our Board of Directors. We all came away hugely impressed with the work in Nicaragua and it was hard to say goodbye to the wonderful, friendly, hard-working people there.

Please click here to see a special report, complete with video and photo galleries, about The Fuller Center’s work in Nicaragua.

Also, click here to see what David Snell had to say about the experience.

Meanwhile, here’s a sampling of some other Fuller Center news from January …

Be sure to check FullerCenter.org and Facebook.com/FullerCenter often for ALL the news and updates from The Fuller Center’s work across America and around the world.