Despite the sweltering August heat and a relentless swarm of gnats, a youth group from Bethel Evangelical Luthera 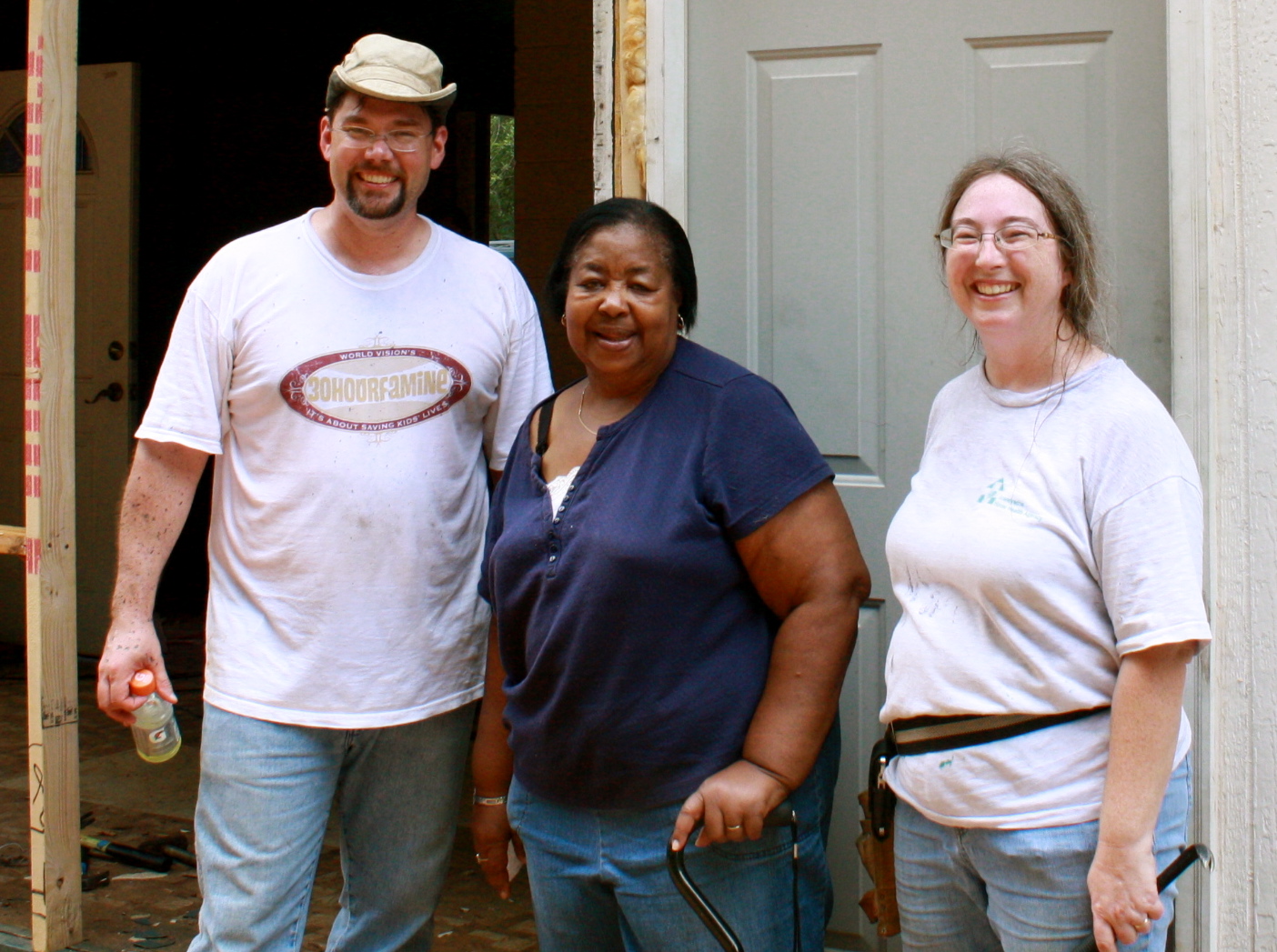 Two houses down and 42 years ago, the Fullers had just divested themselves of their wealth and were building a home for Queen E. White’s parents, Bo and Emma Johnson. The Johnsons’ home became the first of many constructed through the worldwide housing ministry – Habitat for Humanity – that the Fullers kicked off in the Congo in the 1970s.

"It’s all in the family," White said.

In just a few short weeks, this remarkable story will be retraced by a few members of The Fuller Center staff and a United Church of Christ–sponsored delegation– Read more about that trip here – but the beginning of that story is still very much alive in White’s memory.

“I was working at Koinonia at the time, and they were saying that a millionaire was coming. Everyone was excited because we never met a millionaire before. And we were waiting for a long black limousine to pull up, and they came up in a – I don’t know what type of car it was, but it was no up-to-date car,” she remembered with a laugh. “We all looked and said, that’s a millionaire driving that kind of car? But we got to know them, and we just had a good time with them and started building houses. We just had a good time. They were wonderful people to work with.”

White has lived in this home on Koinonia Farm for about 40 years and has raised all four of her children here. Although she’s retired now, she worked in the farm community as a cook for just as long.

In fact, she also cooked the meal for the first Fuller Center board meeting, which included a few southern staples – fried chicken, macaroni and cheese, cornbread and collard greens.

After a lifetime of hard work and serving others, she said she’s thrilled to be on the receiving end of this project, and to have a youthful presence on her property. 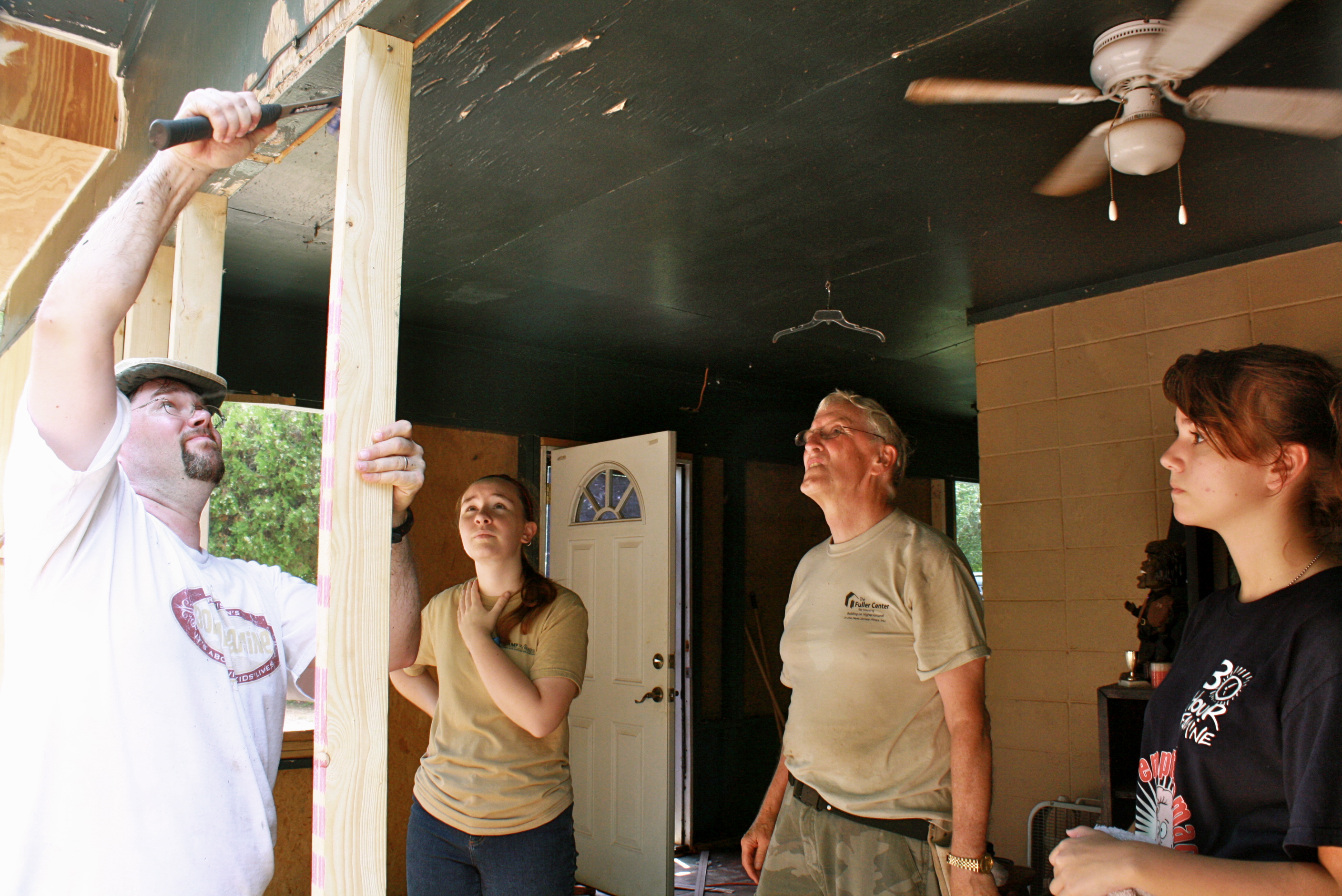 “I tell them, come on in. Don’t be afraid. That’s the way I’ve been all my life. I’m used to being around a lot of people like this, you know? I’ve met people from all kinds of different places. So I’m enjoying this here,” she said. “I’m excited about it. I keep running back and forth looking at it.”

She’s even picked out the colors – maroon and green – that the volunteers will use to spruce up the exterior of the home.

Pastor Jeff Wilson and Sharon Freas, who are leading the mission trip, said they’re just as excited to be here.

“It’s really good all around. It’s a win, win, win – I don’t know how many wins – it’s good certainly for the homeowner, but also for us as leaders and for the kids – they get a sense of what goes in to a house and how things work. It gives them construction experience,” Wilson said. “Also, the idea is before they really get engaged with other activities like jobs, they start knowing how to serve. That’s just an important part of who we are as a Christian church.”

“I came to get construction experience and see how I could help someone,” Ryan Kern, a high-school volunteer said.

The mission trip is part of the church’s “Sawdust and Sandals” program, which is a multigenerational group that works on building and rehab projects for low-income people or disaster relief rebuilding.

The crew drove more than 15 hours to build in Americus.

But hopefully, their experience this week will be well worth this trek – because although these young students might not know it, they’re not just building and battling heat and gnats, but also helping to continue a legacy.