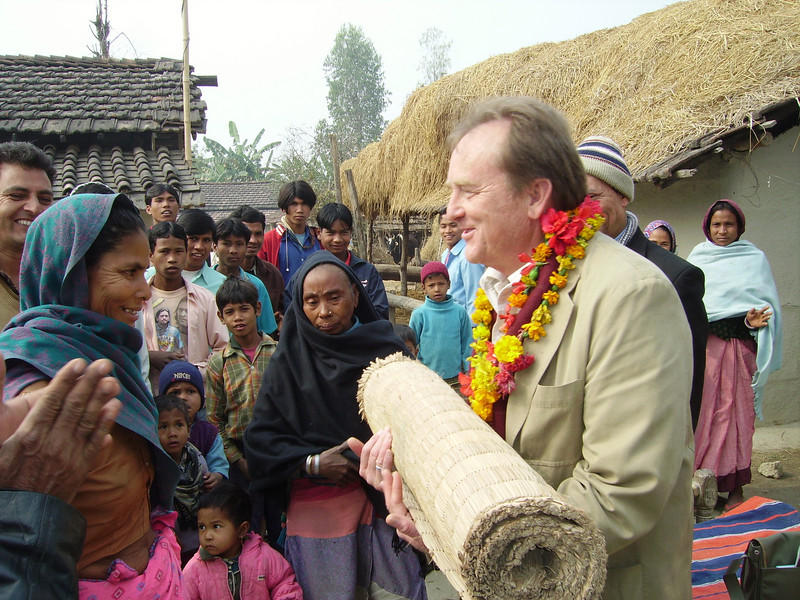 Sorry if I got that old Disney tune stuck in your head, but the song “It’s a Small World After All” actually means something to me now other than just being the hold music the bank used to play when I’d call to check on my checking account balance.

One thing I didn’t expect when I joined The Fuller Center for Housing in June was that this ministry had the power to shrink the world. And I mean that in a good way, not in a “I can’t believe you washed this in hot water” kind of shrinking way.

I’ve met folks from such places as Sierra Leone, Iraq, Peru, Armenia and even Idaho since I came on board. That’s part of the way The Fuller Center has shrunk the world for me. Another is that I’m constantly getting pictures and updates from places we work like Haiti, India, Nepal and even Idaho.

But one of the main ways The Fuller Center has shrunk the world for me is by giving me a boss who has been in more countries than Evel Knievel has broken bones.

I realized once again just how well-traveled Fuller Center President David Snell is compared to me when I was interviewing him about our work in Nepal for a recent story. (You can read the in-depth story by clicking here.) I asked him how many times he’d been to Nepal, and his response was “two or three times.”

Two or three times? I can detail the exact number of my trips outside of the United States: One. My foreign travel consists of one night in Windsor, Canada, when I visited for a few hours while attending a newspaper conference across the river in Detroit. I’m afraid the tales of my exotic adventures in Windsor fail to measure up to David’s globe-trekking — although I nearly missed the bus back into Detroit, which caused me a great deal of distress at the time.

I’m really jealous of David’s world perspective, but I’m glad that during our interview he was able to confirm something I’ve always thought about Nepal: “Nepal is totally cool.”

Seriously, I am not making that up. Those were David’s exact words. I’m not sure if I was supposed to repeat them, but those were indeed his exact words.

If you’ve ever had the chance to sit down with David and hear him talk about taking a boat through the jungles of the Congo or passing on a chance to sing at a North Korean restaurant, you know how he can make world travel sound fascinating. I guess such stories are a perk that comes with the job of helping change lives around the world with simple, decent, affordable housing.

But Nepal may be his best story. Of course, his fondness for Nepal is deeply rooted.

“The very first thing I remember ever writing in school was a report on Tibet,” he said. “And that whole region of the world has just fascinated me. And to be able to go back there was a true treat. I’ve been there two or three times now. It’s a mystical place.”

Whether it’s David’s off-the-cuff travelogues, Gohar Palyan telling me why everyone loves Armenia or Jonny Jeune sending me pictures of new homes that have transformed lives in earthquake-ravaged Haiti, The Fuller Center has truly given me a new perspective on God’s great earth.

Why not gain a new perspective on the world by joining or starting a Fuller Center Global Builders trip? Click here to learn more.