Nearly everyone who has taken a Fuller Center for Housing Global Builders trip to work in the community of San Luis Talpa, El Salvador, has fallen in love with the work, the land and its people … and one little girl in particular.

San Luis Talpa is a poor community that is rich in spirit and high on hope, where smiles speak volumes about where its residents have been — and where they are going. Perhaps none of those smiles says more than the one always radiating from the beautiful face of 12-year-old Blanca, daughter of a Fuller Center homeowner in the community. 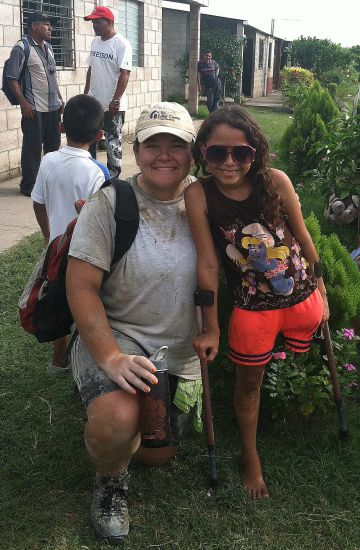 Blanca has every excuse to not smile. Seven years ago, she was nearly killed when she was struck by a bus. She suffered massive internal injuries and lost her left leg. Since then, she has dealt with an ill-fitting, crudely made prosthesis that she has now outgrown and rarely used anyway because of the pain and chafing it caused.

And on top of those physical scars was the unimaginable emotional blow suffered when her mother abandoned the family shortly after the bus accident, leaving Blanca to be raised by her father, who has remained steadfastly by his daughter’s side.

Yet, what volunteers see on their build trips to El Salvador with The Fuller Center is not a sorrowful victim but a smiling girl bounding around the playgrounds on one leg, playing sports like soccer, baseball and basketball with the boys. About the only time a smile leaves her face is when she gives neighborhood boys a well-earned dressing-down as girls her age are known to do as they navigate the fine line between flirting and annoyance.

“All the children in the community there are wonderful, but there’s something extra special about her,” said Fuller Center Global Builders coordinator Hailey Dady, who met Blanca on a trip to El Salvador in June. “She’s so full of life and determination.”

“Everybody loves her,” chimed in Mike Bonderer, leader of Homes from the Heart and director of The Fuller Center’s operations in San Luis Talpa. “She’s just got a dynamite personality. She’s very inspirational. I just think the world of her.”

“There’s this little girl running around there who’s just beaming, really smart, really sweet and really pretty with a big smile, and she’s hopping around on one leg playing basketball and soccer,” added Mark Benjamin, minister of worship at Asbury United Methodist Church in Raleigh, N.C., which had a team of 19 people go there on a Fuller Center Global Builders trip last year. “And she’s in there with the boys playing. She’s awesome.”

In short, she is everything a 12-year-old girl should be. And thanks to those 19 people from Asbury UMC, Blanca now walks like the other children in her community.

A Canadian, Benjamin’s travels led him a few years ago to Koinonia Farm, the Christian farming community just south of Americus that spawned the affordable housing movement and the nearby Fuller Center for Housing. During his time at Koinonia, he got to know Fuller Center President David Snell and Director of International Field Operations Ryan Iafigliola, who also founded the Fuller Center Bicycle Adventure. Those connections ultimately led to Blanca’s latest reason to smile. 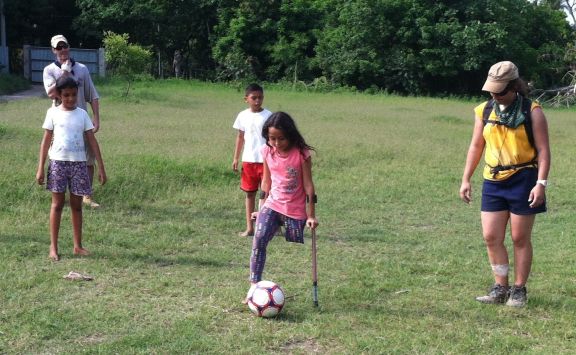 After Benjamin took a position with Asbury in Raleigh, he helped The Fuller Center raise funds and awareness as a cyclist on the Fuller Center Bicycle Adventure. In 2010, he rode with fellow church members Scott Smothers and James Bernstein.

“We basically designated some money for El Salvador the first year that we sent out a bike team from Asbury and thought it would be neat if we could go down and work on the site where we contributed,” Benjamin said. “So we took a team of 19 folks from Asbury down to El Salvador.”

In addition to building homes, Benjamin said the team members wanted to do even more to leave a lasting impact in the community they grew to love during their short time working there. Part of Bonderer’s Homes from the Heart initiative in San Luis Talpa is a jobs project called Many Miracles that helps train women to sew for a living. Church members helped get it up and running by designing bags and sending templates for the workers to create bags to create and sell. But Bonderer had another suggestion if the group wanted to truly leave a lasting impact.

“Mike said, ‘The huge thing for me is what we do with these kids. They’re the future generation of leaders in this community,’” Benjamin recalls. “He sees working with the kids as a huge part of the process. So he said, ‘If you could do one thing, help Blanca with her leg.’”

Perhaps it was providential that one of Asbury’s team members on the trip was physical therapist Skip Roy, a member of Asbury for more than 30 years. 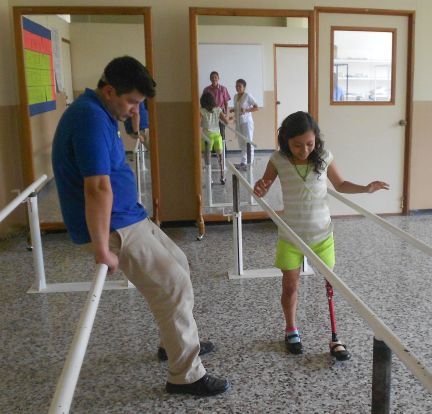 “We asked permission to meet her father and went in and examined her,” Benjamin said. “We took some pictures and talked to a local doctor who said he’d be delighted to have her come up here and be fitted, but we didn’t feel like it was the right move to bring her out of her community. So Skip really initiated it. He basically got Mike to take her father in to a place to get a prosthesis and asked how much it would cost. They told us how much it would cost, and all the funds for it were raised by the 19 people who went on that trip.”

On Tuesday, Aug. 14, Blanca finally received her new prosthesis at Don Bosco University in San Salvador. Bonderer said that the only smile bigger than Blanca’s might have been the one on the face of her father, whom Bonderer met and helped get an affordable and decent place to live in the community long after Blanca’s accident.

“Her dad’s a role model,” Bonderer said impassionedly. “Her mother abandoned her right after the accident, and he took total responsibility. He had a good job at the airport and is just a super guy.”

Asbury’s contributions to Blanca’s life, though, are not finished.

“The Salvadoran government will start taking care of her prosthesis when she’s an adult, but we’ve committed to supporting her as she grows,” Benjamin said, adding that the current prosthesis is designed to grow with her for the next three to four years.

Asbury’s efforts touched the soft side of Bonderer, a colorful character who often camouflages his kindness with the gruff bluntness of the ex-Marine that he is.

“The people at the church are just wonderful people,” he said.

Click here to contribute to our work in El Salvador and around the world.

The video below is of Asbury’s Mark Benjamin and James Bernstein during the 2010 Fuller Center Bicycle Adventure: