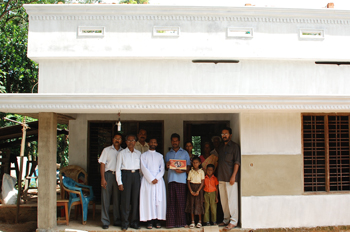 On Sept. 14, 2007, five good souls met to form the Trivandrum Fuller Center. Trivandrum (or Thiruvananthapuram) is the capital of Kerala state and is located in the far southwest of the country. Trivandrum Fuller Center built its first home during the Millard Fuller Legacy Build, raising its own funds to do so. Read a story about the homeowner, T Joy.  The program has now completed over 20 houses. View pictures of the first 20+ houses and meet each family at a glance.

BACKGROUND
According to UN-HABITAT, 170 million people in India live in slums, totaling 17 percent of slum-dwellers worldwide. Trivandrum, where the Fuller Center is headquartered, is the capital city of the state of Kerala. Kerala is a beautiful coastal area located at the southern tip of India. Despite being the most literate and socially developed state in India, Kerala has a very high unemployment rate. The rate in Trivandrum is 25.5 percent.

GOALS
The goal of the Trivandrum Fuller Center is to create an organization that will serve as a model for other Fuller Center Covenant Partners in India. Its Chairman, Mr. T.H. Lawrence, is also working with us to review applicant partner groups from throughout India.