In World War II, my grandfather, Fred Dixon, lost both of his legs to Nazi machine gun fire in Tunisia 1943 while he was fighting as a member of the legendary Darby’s Rangers. He carried one of his legs in his arms on his way to cover as he continued to return fire. He was quite the fighter.

That drive continued when he came home and helped raise war bonds in Washington, D.C. First Lady Eleanor Roosevelt wrote about him in her nationally syndicated “My Day” columns on Feb. 21, 1944, and Feb. 25, 1944. (Click the dates to read them.) He was optimistic then. But by the time I got to know him in the 1970s until he died in 1981, all the optimism had been drained from him. He was pessimistic, caustic and bitter because he felt like he gave a lot more for his country than his country gave for him. It was a daily struggle then, back when America wasn’t nearly so accessible for those in wheelchairs. He loved kids and his grandkids, but he had little use for adults, especially bureaucrats and the people who held up his medical care with red tape.

That brings me to Fuller Center homeowner Thad Harris. His 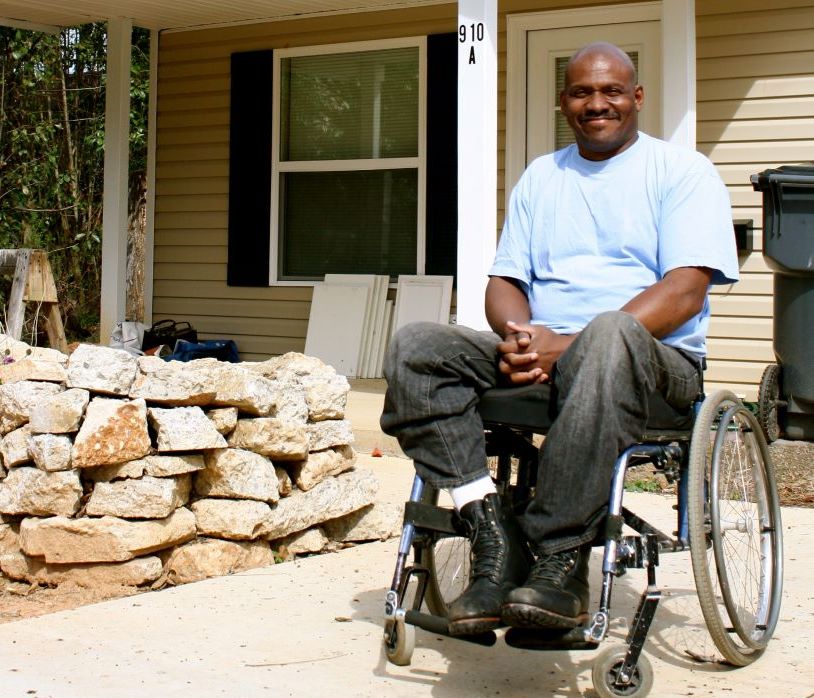 story is similar, though inversely. He once had feelings similar to what my grandfather experience late in his life. But Thad rose from that point to where he is now. Now, he exudes joy, optimism, determination, love and amazing generosity and selflessness.

Thad was confined to a wheelchair after he was paralyzed in an auto accident through no fault of his own. For years, he was depressed and felt hopeless. “Life was just one long day,” he told me last year. But everything changed when he became a Fuller Center homeowner. As he said, “The American Dream was here. It’s here now, and for me!”

If generosity was a drug, Thad would be hopelessly addicted. I see Thad all the time these days, rolling through the headquarters in search of Americus-Sumter FCH director Alyssa Hostetler, trying to find out whom he can help next. One of those people he has helped is Deborah Clayton, who faces challenges of her own, yet is just as positive as Thad. No wonder they’re friends.

It doesn’t amaze me that they are so positive. I’ve seen many face enormous obstacles and, yet, be thankful for all they do have. But it does impress me that they are so driven to continue giving to others because they think they are so fortunate. If you watch the video below, you’ll be impressed, too.

In the past week, I’ve dealt with an auto accident involving a deer, debit card theft, health insurance craziness, a collapsed mailbox, a malfunctioning washing machine and more of those incidents that seem so little until they pile up. And, for a moment, you think, “Why me?!”

And then you meet people like Thad and Deborah, whom I met for the first time yesterday. It not only make you feel guilty for worrying about your own petty problems, but it also inspires you to give more of yourself. If Thad and Deborah know that it’s a greater blessing to give than to receive, then there’s no excuse for the rest of us to not know it.

And, Thad, if it weren’t for you inspiring me to write about you, then I wouldn’t have stumbled across Mrs. Roosevelt’s writing about my grandfather for the first time today. So, when you pay it forward like you do, it usually has ripple effects is ways you often can’t expect or imagine.