The final day of the 2015 Millard Fuller Legacy Build started with devotions, just like the previous four days. But Lee Jeter, Executive Director of The Fuller Center for Housing of Northwest Louisiana, had a simple message he wanted to convey on the last day of the weeklong blitz in the resurgent Allendale neighborhood of Shreveport:

“This is a community that at one time people had abandoned and taken off life support,” he said. “And now we’ve got it going through rehabilitation, and it is coming back to life because of the efforts that you have provided. I cannot thank you enough. Thank you! Thank you! Thank you!” 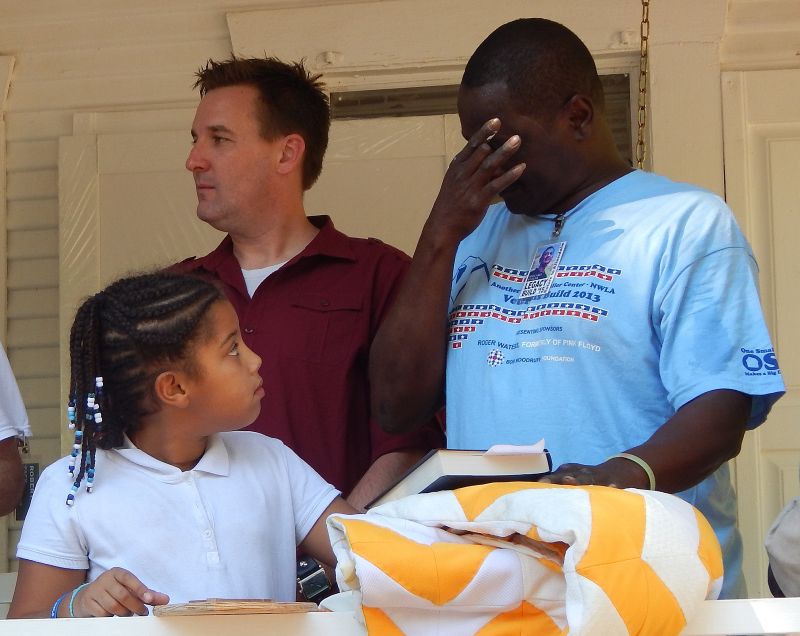 There were many thanks spoken during the final day, especially at the end when four new homes and one rehab project were dedicated.

On Alston Street, Anthony Morgan broke down in tears as he thanked volunteers for making not just major structural and electrical repairs on his home but also for fitting it with cabinets and new appliances, as well as small touches for his daughter RyRy’s bedroom.

“This is my main blessing,” he said as he kissed his daughter on the head during the dedication of his home. “I love this girl so much. I’ve been blessed beyond measure. This has been one of the best weeks of my life.”

Similar scenes were repeated along Clay Street, where the four new homes were dedicated. Tears flowed freely and hugs were shared especially at the Glen and Brenda Barton House, which will be occupied by Roderick and Quinetta Carter, a hard-working couple married two years ago who are expecting their first child in March.

“I just want to thank everybody,” said Brian Barton, whose father Glen was the boots-on-the-ground driving force behind the Allendale revival before he passed away unexpectedly in 2011. “There’s not a a day that I don’t miss my dad,” he continued through tears. “He’d be thoroughly thrilled with what we see here.” 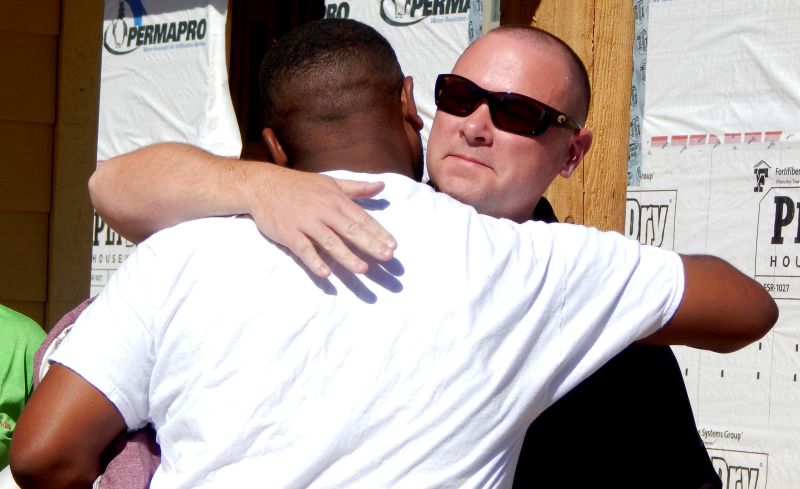 Roderick and Quinetta both said they were construction novices but were thankful that volunteers kept them working and busy, showing patience as they moved from project to project and handled tools they’d never before touched. Roderick talked of his anticipation of spending the holidays in their new home and envisioned his child playing at the playground that will be built later this month next door to their home.

One door down from the Carters, Lytonja Smith spoke of how her Muslim family forged bonds with Christian volunteers and how “we are all one people.” One door up from the Carters, Vietnam veteran Robert McDuffy received the keys to his home from the co-founder of The Fuller Center, Linda Fuller, who praised his work effort on the site despite also working at his janitorial jobs during the week. And at the bottom of the hill, James and Suzanne Robinson wondered if they would have enough furniture to fill their small but beautiful new living space.

House leader Jim Tomascak summed up the day as he made a simple but true correction to a statement someone made about a house being dedicated.

“We did not build four houses this week,” he said. “We built four homes.”

The first part of the Legacy Build will be an international blitz as volunteers will head to the busiest of all the covenant partners in the Fuller Center ranks — Armenia. Later in the year, volunteers will converge on Millard Fuller’s hometown of Lanett, Alabama, which also hosted the first Legacy Build in 2009.

Exact dates and other details will be announced soon.

Click here for photos from day 5 of the Legacy Build.

Click here for photos from the house dedications on Friday.