Though more recent disasters elsewhere have taken the spotlight off of Haiti nearly three years after a massive earthquake rocked the already poverty-stricken Caribbean nation, The Fuller Center for Housing’s work there continues to grow.

Building in two main areas — near the earthquake’s epicenter in Gressier and the northeast Port-au-Prince suburb of Croix-des-Bouquets — The Fuller Center’s work is easily measurable in one way: A total of 71 new homes have been built, including 47 in 2012.

But while the home counts are growing yearly in measurable ways, not as easily quantifiable is the way The Fuller Center is empowering Haitian homeowners, communities and workers. During the past week, however, light has been shed on how both house counts and empowerment are poised for even more growth in the future, particularly in Croix-des-Bouquets. 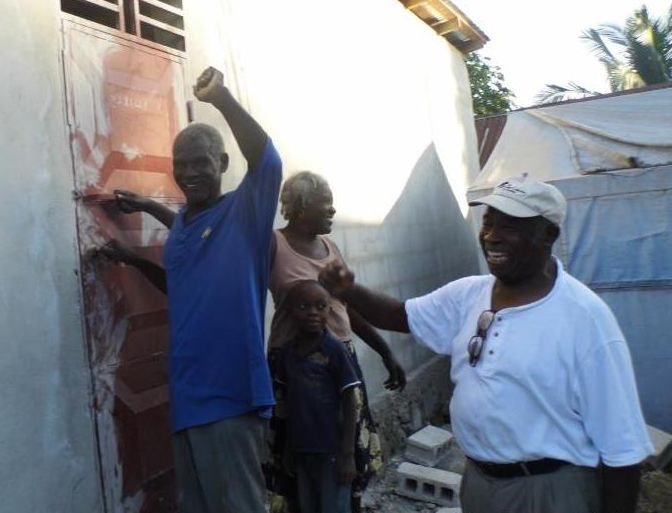 Fuller Center Director of International Field Operations Ryan Iafigliola met at The Fuller Center’s international headquarters in Americus with several people involved in the project — including local resident Jacob Battle, who was in Croix-des-Bouquets last month for the construction and dedication of a Fuller Center triplex that is now home to three families totaling 20 people. Now, Battle wants to see a 100-home village go up in the same area.

“I think it’s doable; it can happen,” said Battle, who has been developing relationships with people and businesses on the ground in Haiti through his Voice for Haiti mission. “We have all that we need in order to make it happen — we just have to make sure that we raise the resources to do it.”

Battle believes that the cost-efficient homes he has built in conjunction with Fuller Center partner Mike Bonderer (whose Homes from the Heart builds Fuller Center homes in Haiti and El Salvador) meet a need and fill a niche in Haiti.

“There’s not a whole lot of people coming in to build homes,” Battle said. “There are people who come in and build a house, but it’s more expensive, twice the amount of money for which we can build a house, and it’s not as sound as the one that we build. Our house will surpass any one of the houses that some of the organizations have built there. Our house would surpass that by a football field.” 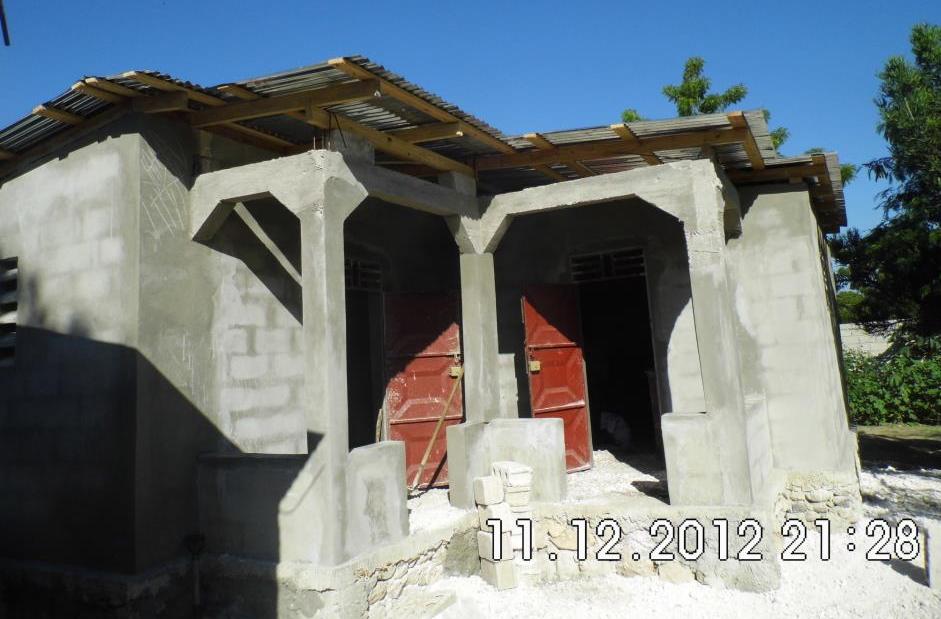 “The Croix-des-Bouquets project in Haiti has made some tremendous progress in the last 12 months as it completed 20 homes,” said Iafigliola, who was impressed with Battle’s vision and with reports from Jimmy Dieudonne, a Croix-des-Bouquets resident who also was in town to offer his perspective as a construction supervisor there. “Mike Bonderer, Jacob Battle and Jimmy Dieudonne are definitely masters at stretching every dollar to their limit. They’re not working for any pay — they’ve simply committed their lives to giving themselves to helping others have a decent place to live.”

Fuller Center President David Snell also praised the work in Croix-des-Bouquets for carrying on The Fuller Center’s mission of using a hand-up approach focused on long-term results. Snell wanted to make sure that The Fuller Center’s efforts there would be effective and make long-lasting impact as he feared that the flood of handouts pouring into the nation immediately after the quake would ebb and leave Haitians high and dry. When he committed to working in Haiti, he committed for the long haul.

“In the early days after the earthquake, then Fuller Center board members DJ Bakken and Jacob Battle built the first Fuller Center recovery houses in Croix-des-Bouquets,” Snell said. “With our partners Homes from the Heart and Voice for Haiti, our work continues there to this day. We’re there for the long term, helping this battered country recover in the hopes that a better Haiti will rise from the earthquake’s devastation.”

THE MAN ON THE SCENE

And it is that familiarity with the people, businesses and processes of Croix-des-Bouquets that have helped make 2012 such a successful building year there.

“What he brings to the table is priceless,” Battle said. “Jimmy is able to communicate with the businessmen there, the organizations that we buy our materials from. He’s able to negotiate on prices. He can put together a labor force. Jimmy cuts the price of what we would normally pay to build a house by at least a third.”

Dieudonne’s goal, though, is not just to build houses at the best price. He also wants to erase misconceptions about his country and its people.

“The news always shows the ugly side of Haiti, but we have nice beaches and nice mountains,” said Dieudonne, who studied computer science at Keiser University in Fort Lauderdale, Fla. “Port-au-Prince is very crowded and dirty. But once you go outside of Port-au-Prince, when you go into the mountains, the villages, it’s really clean and natural. It’s different. When I have missionaries in Haiti, I always try to have them visit the other side of Haiti like the beaches and mountains and villages.”

The stereotype some have of Haitians waiting for a handout is another he hopes he can help address by assembling workers to help build the homes.

Mark Bradley of CrossWorld also was in Americus to learn more about The Fuller Center’s work in Haiti. Bradley, who has spent much time working in Haiti and is married to a Haitian, is looking for ways his church — Church of the Saviour in Wayne, Pa. — can be more involved in helping people move out of tent cities. He agrees with Dieudonne but also sees how the stereotype has some elements of truth. 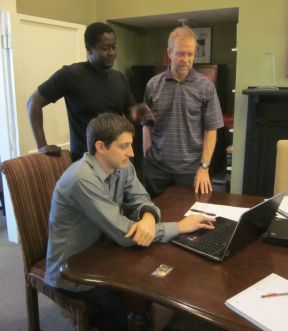 “On the one hand, Haitians are very hard-working people,” Bradley said. “You give them some opportunity and they thrive. They take it and run with it. On the other hand, there have been so many handouts given in Haiti with the people who have no opportunity, a lot of times there’s a reflex there: You’ve come here to help, so lay it on me. So there’s some education needed on both sides. You’re not really helping somebody to just give them charity most of the time. … It has to be smart giving.”

After talking by phone with Iafigliola and then visiting headquarters in Americus, Bradley came away impressed with The Fuller Center and its method of offering a helpful hand up in partnership with Haitians.

“It was a blessing talking to Ryan,” Bradley said. “He’s like a breath of fresh air on this whole subject because it’s been very discouraging to see how many big organizations that are supposed to have big money in Haiti, and it seems like nobody is doing housing. … This is an operation that’s doing good work — and doing it very efficiently.

“I also sensed a very Christ-centered approach here,” he added. “It fits with me, and it fits with our church. We want to work with people who are ready to partner with us. It just seemed like a good fit.”

Iafigliola was pleased that Bradley got to see two perspectives of The Fuller Center’s Haiti efforts — from headquarters and from a Croix-des-Bouquets resident.

“It was terrific to have Jimmy visit us in Americus the past few days,” Iafigliola said. “He is an incredibly dedicated servant of God and super important driver to the project. It was really helpful for all involved for him to come here to get to know us better. And while he was in town, he was able to help develop new relationships with several local churches and with Mark Bradley. We are all excited to see what God has in mind for the budding partnership with Mark, his church and the Haiti network that he is forming.”

As for Dieudonne, he is eager for the next houses to go up because he sees first-hand how much it means to his neighbors.

“I think having a place to stay is the best thing because even the people who are hungry, when they have a decent, clean place to stay, it’s a big dream,” he said. “When you give somebody like that a 16-by-16 house, it’s a big thing for them. It’s really appreciated. Last time we built a triplex, I don’t know how many thank-yous I got. I said, ‘No, just thank God.’ That’s very important.”

If you would like to know more about how you can help our work grow in Haiti, contact Fuller Center Director of International Operations Ryan Iafigliola at ryani@fullercenter.org.

See photos from The Fuller Center’s work in Croix-des-Bouquets and Gressier.

Want to volunteer to work in Haiti? Click here.