“It’s just been an incredible week,” said Charlie Park, who leads the Fuller Center for Housing of Webster Parish and headed up the third annual Legacy Build. “God has been so present in the work of our good volunteers, our house leaders and all the people involved. God has been here, and we’ve been blessed to be His hands and feet. Good things have happened.”

The afternoon dedications capped a week of hard work that began on a warm, sunny Monday. Wind and rain Tuesday ushered in cold mornings, but Friday’s weather was picture perfect. Nearly 200 volunteers stayed after the dedications for a dinner and celebration – and to say farewell to old and new friends, at least until next time at a site yet to be determined.

Addressing the crowd at Minden’s First Baptist Church during the farewell celebration, Fuller Center for Housing President David Snell used the opportunity to encourage those fueled by the excitement of the build to continue being involved with the Fuller Center’s affordable housing movement. 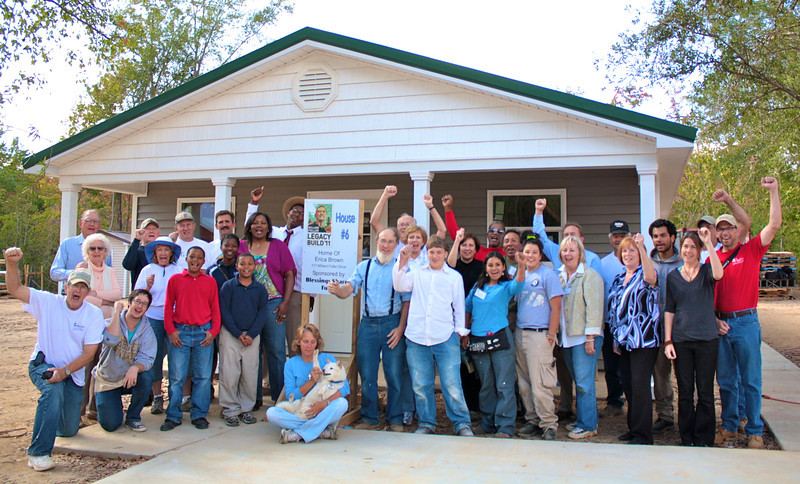 Co-founder Linda Fuller then addressed the crowd after a long ovation for her and new husband Paul Degelmann, who were busy all week long on the build site doing construction work.

“My heart is full this evening,” she said. “When I walked in the door this evening, I thought, isn’t it nice to see people sitting down? It feels good to sit down after this busy, busy week.

“Millard would be so proud of each and every one of you,” she added. “He had such a love and appreciation for so many of you here who’ve been coming year after year. He would have been proud to be here this week. And, somehow or another, I feel that he was looking down on us and blessing us.”

‘Driven in with love’

Most of the house dedications occurred simultaneously Friday around 3:30 p.m. CDT. Dozens more were dedicated throughout the United States and around the world – including in India, Nigeria, El Salvador, Sri Lanka and other countries where The Fuller Center has covenant partners.

“It’s a blessing to see the blessing,” house captain A.J. Jewell said after the dedication for house No. 7 on Millard Fuller Drive, a home that will be occupied by Shanika Harris and her sons Aaron and Andrew. “That’s the ultimate right there, seeing the moment, the finalization.”

“I have a house that was build not by man’s hands but by God’s hands,” Harris said after her house was dedicated. “And for these nice people to come and help me is a great blessing. I’ve been praying for a blessing for a long time, and I received that blessing. I thank God for those who came out of their way from across the country to help someone like me.”

She also expressed a little love for someone besides God.

“I love Mr. A.J!” she exclaimed about her house leader. “I appreciate Mr. A.J. so much. He’s a wonderful man.”

Harris, and the volunteers who worked on her home got to see the soft side of the serious-looking man behind one of The Fuller Center’s most recognizable moustaches.

“The moustache hides it,” Jewell said with a laugh. “These guys will all tell you. A little old lady told me one day, ‘Son, you need to smile more.’ And another little old lady standing next to her said, ‘Aren’t you paying attention? See those wrinkles and that glow in his eyes? He’s already smiling.’”

Just a few steps down the street, at the same time, was the dedication for house No. 5, which will be occupied by Uanya Shine and her children My’ya, 7, and Jaylen, 4.

"Whenever I go on one of these trips, one of the first things people ask me is, ‘Well how many houses are you building this time?’” No. 5 house captain Jim Tomascak told Shine during the dedication. “And I tell them, ‘None. We don’t build houses, we build homes.’ You can feel pretty confident that every nail driven in this house was driven in with love. This is a house that will not fall. We hope that you and your family are blessed with it for many, many years."

On the road again

Bill Moriarty has been on the site since the first of August to make sure the week went smoothly for the hordes of volunteers that included familiar faces, young AmeriCorps volunteers, corporate friends and more.

“This build has pulled together more people and more resources to accomplish one project than a lot of the other builds I’ve been on,” the construction supervisor said Friday. “And what I mean by that is there’s more donations involved, there’s more people involved that just want to help and want to get things done instead of having to pay a lot of people to accomplish things.”

Of course, for Moriarty and his wife, France – along with the most popular personality on the build site, their dog Spirit – the end of one build is just the start of another for the service-minded couple. The two were scheduled to arrive today in the tornado-ravaged city of Joplin, Mo., to help build 10 homes in 10 days.

See all the photos, videos, stories and blogs from the Legacy Build here!