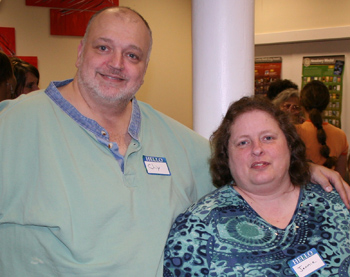 Chip Gibson was originally from Hamilton, Ohio and moved to the Indianapolis area in 1978 to care for his grandparents and to work for the Indianapolis Star. After 28 years of employment, he had to take disability due to bad knees and poor health.

Jennie Gibson is from Wisconsin and moved to Indianapolis in 1980. She became involved in the Shepherd Community Church of the Nazarene in 1990. She also has several health issues. Chip first visited Shepherd Community in 1994 where he and Jennie met. They were married in 1995.

The Gibsons have continued an active membership at Shepherd Community with both of them sitting on the church board at various times. Jennie has been employed at Shepherd since 2002 and is currently the secretary of the church board as well as Adult Sunday School teacher. Chip assists in the sound booth and is very active in local civic associations, currently serving as the President of the near east side community organization.

The Fuller Center Legacy Build means so much more to the Gibsons than just a new roof over their heads. The house will be handicapped accessible in preparation for a wheelchair which is in Chip’s future. This is a huge relief to them. More than that, living in a Fuller Center home will reduce both their housing and their utility expenses by half, providing resources for future health care and ministry needs.

The Gibsons would like to thank the Fuller Center, all of its volunteers, supporters, partners and friends who make all of this possible. Their vision will provide them peace of mind as well as the continued ability to serve their God, their church and their neighborhood. 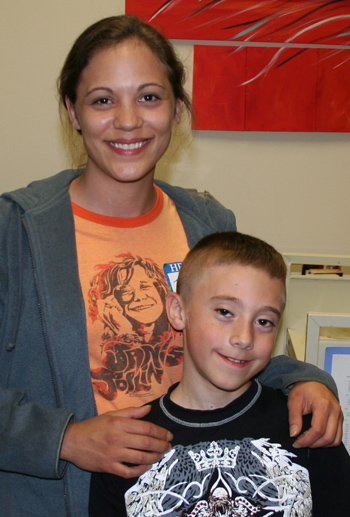 Tony Mobley was raised in the Fountain Square area. Her mom has a SEND home now. She graduated from high school in the area and wants to attend college in the coming years. She feels having a stable home will help.

She married very young and now wants a better life for her children. Her new home will be in walking distance from her mother’s home.

Her son, Michael, aged 7, goes to the local charter school. Her daughter, Kayla is 2 years old.

As a kid, Mobley used to walk to get ice cream in the neighborhood but by the time she was in high school, she was afraid to walk anywhere. She is very excited to be a part of rebuilding this neighborhood so it can be safe again for her children.