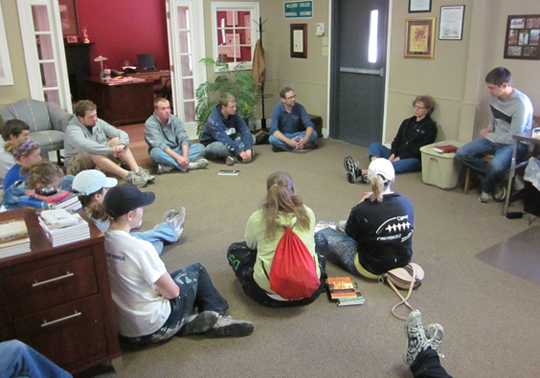 The University of Cincinnati students working with The Fuller Center’s Americus-Sumter covenant partner on the home of Nelmile Walker through their “Serve Beyond Cincinnati” group got more than they bargained for today.

But they got something this morning they won’t soon forget. Linda Fuller, who helped launch the affordable housing movement with Millard Fuller decades ago, sat down on the floor of Fuller Center headquarters this morning as the students circled around her.

They got a history lesson as she told how the story of how Habitat and The Fuller Center were launched from ideas formed during their days at Koinonia. There’s history you get from books and history you get from TV and the internet, but you can’t beat history as recounted directly by those who made it.

And, more importantly, they got life lessons from someone who saw her marriage nearly destroyed by Millard’s early pursuit of what many see as the American Dream. She told how she and Millard amassed a fortune, a fortune that made them utterly unhappy. And she told how they gave all that up … and found everything in service to God and their fellow man.

I’d met Millard years ago in passing while I was in the newspaper business here in Americus, but I’d never truly gotten his story. And even though I’ve grown to know and love Mrs. Linda (she hates when I call her anything other than Linda, but some habits are hard to break), even I’d never gotten her story as these college students heard it today.

I’ve read about it over and over. I’ve seen it in video. I’ve heard it from colleagues such as David Snell and Kirk Lyman-Barner and from family such as my predecessor here Faith Fuller, who grew up a part of this historic movement. And I’ve had many conversations with Mrs. Linda about photos and videos and mail. But even I had not heard the story the direct way these students did until this morning.

I could have plopped down at my computer first thing this morning and ignored the talking behind my head, but I decided to go sit down with the students and hear the story myself. No one should miss an opportunity to sit down with a real history-maker when they get the chance.

Around here, we get that chance often, and we are so thankful for Mrs. Linda … er, Linda’s continued involvement with The Fuller Center and our growing mission to eradicate poverty housing.

Meanwhile, you can read the history of our movement by clicking here.