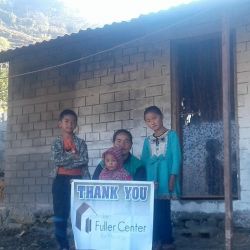 Completion of 66-home community in Mizque, Bolivia, strikes blow against Chagas disease, which had once festered in mud huts and shacks the new, safe homes replaced.

Fuller Center President David Snell delivers keynote address at National Day of Prayer event in Americus, Georgia. “Unity isn’t something that just happens,” Snell tells the crowd. “It is the result of good-hearted people doing good things, coming together to make the world better for all of God’s children.”

We could have won the National Spelling Bee this year! This was the word that won it for Spelling Bee champ Karthik Nemmani of McKinney, Texas — “Koinonia.” 🙂

President David Snell and wife Sheilla attend Fuller Center of Armenia’s 10th anniversary celebration, honoring the partner for the completion of more than 650 homes in that time.

Chattahoochee Fuller Center Project dedicates its 40th new home build in the area after a one-week blitz in Valley, Alabama. Carmen and Rodney Lott are the proud and grateful homeowners. See the emotional story of this blitz here.

Finally! The nation’s top charity watchdog, Charity Navigator, agrees to evaluate and rate The Fuller Center for Housing. They give The Fuller Center its highest-level 4-star “exceptional” rating with its overall score of 95.47 out of a possible 100 points — higher than most nonprofits, especially those working in the area of housing.

Director of International Operations Ryan Iafigliola is featured in an extensive Go Abroad article about The Fuller Center’s work and his motivations to serve in this ministry.

Habitat for Humanity donates Millard Fuller’s former law office — which also served as the first headquarters of Habitat — to The Fuller Center for Housing.

President David Snell releases his first book, “The Tattered Passport.” The book details the many fascinating places he has visited and people he has met through his years in the affordable housing ministry. Proceeds benefit The Fuller Center’s work, and copies can be easily ordered from Amazon.com at this link.

Rising pop star Rayla, a favorite on Radio Disney, gives an exclusive interview with BSCKids in which she talks about summers spent volunteering with The Fuller Center and the impact it has had in her life.

LeRoy Troyer, a long-time friend of the Fullers and a tremendous supporter of both Habitat for Humanity and The Fuller Center for Housing, dies at age 81. He was known for many things, including being former President Jimmy Carter’s house captain on Jimmy Carter Work Projects and as an architect for designing the massive Ark Encounter in Kentucky. “He leaves behind a huge legacy in the many churches, institutions and office buildings that he designed,” Fuller Center President David Snell said. “And he leaves a greater legacy in the hearts of all those who knew and loved him for his wisdom, gentleness and faith. LeRoy was the chair of The Fuller Center’s board for many years from its founding on and artfully guided us through good times and bad. We owe him a tremendous debt of gratitude for The Fuller Center would not be what it is today without his good work in laying a firm foundation under it.”

Fuller Center Disaster ReBuilders dedicate first restored home in New Bern, North Carolina, and announce dozens of teams of volunteers are on the way with tremendous interest but little money focused on the area battered by Hurricane Florence the previous year.

East Alabama Medical Center recruits Chattahoochee Fuller Center Project to build homes in tornado-ravaged Beauregard, Alabama, well outside of the CFCP’s normal work area. EAMC funds the first three homes, which are mostly built during a one-week blitz and dedicated less than two weeks after the build began. A dozen more homes are planned, including 10 to be built during the Millard Fuller Legacy Build at the end of September.

Dozens of volunteers assemble in Dickinson, Texas — where the Fuller Center Disaster ReBuilders have been working for nearly two years since Hurricane Harvey struck the area — for the Brenda Barton Memorial Build, during which two new homes are constructed. 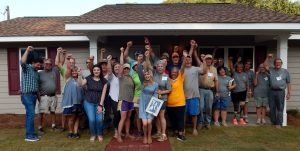 The 18th home in the Lee County, Alabama, tornado recovery is dedicated in the town of Smiths Station.