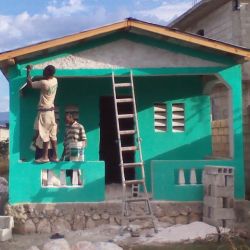 The United Church of Christ provides $114,000 to build 20 new Fuller Center homes in Haiti, 18 of which are built in the Croix-des-Bouquets area.

A 68-person team from Countryside Mennonite Fellowship near Waterloo, Ontario, becomes the Global Builders’ largest-ever work team on their trip to Nicaragua, also pushing the Global Builders past the 2,000 participant mark all-time. Click here for a report on the trip.

The Fuller Center for Housing of Armenia reaches an agreement to assist low-income families in building safe, decent and affordable homes in the Republic of Artsakh. The project traces its roots to the top of Mount Ararat, where Noah’s Ark came to rest in the Biblical story of the Great Flood. In August 2013, Artsakh Prime Minister Ara Haroutyunyan’s spokesman Artak Beglaryan and Fuller Center of Armenia Development Director Gohar Palyan were in the same group of hikers to ascend the legendary 16,945-foot summit. Their discussion during that trip led to the formal agreement.

A total of 26 cottages donated by the Mississippi Emergency Management Agency to the city of Greenwood are given to The Fuller Center to use in the city’s Baptist Town neighborhood. The cottages were originally designed as homes for residents displaced by Hurricane Katrina in 2005 and sat unused in storage for months as the transfer required state government approval. Mississippi Gov. Phil Bryant signs a law approving the plan, a measure that passed the state’s House of Representatives 120-2 and Senate 51-0. Click here to learn how they’ll be used.

The 6th Annual Millard Fuller Legacy Build is hosted by The Fuller Center for Housing of Louisville.

A piece by Fuller Center Director of Communications Chris Johnson appears in the New York Times’ “Room for Debate” section on the topic of “Can ‘Voluntourism’ Make a Difference?” Click here to see the debate.

Annual Fuller Center Bicycle Adventure begins with a Build Day in Atlantic City, then sets off on 3,600-mile journey to Astoria,Oregon.

More than 250 World Changers work on a record 32 projects with the Ginger Ford Northshore Fuller Center for Housing in the Hammond-Ponchatoula area of Louisiana.

Katherine Jackson, mother of the late King of Pop Michael Jackson and matriarch of the musical Jackson family, visits with Fuller Center Bicycle Adventure cyclists during their work day on Jackson Street in Gary, Indiana, where The Fuller Center is beginning its work in the city. Mrs. Jackson is brought to tears when she sees the improvements coming to the street where she raised her family.

The Fuller Center of Gary, Indiana, hosts the Jackson Street of Dreams Build, coinciding with events marking the birthday of the late King of Pop, Michael Jackson.

The 40 Years in Africa campaign officially concludes with the completion of 40 homes, including 24 in Nigeria.

A strong earthquake rocks Nepal. Fuller Center homes in the Trishuli village, just 30 miles from the epicenter, all make it through the quake unscathed.

Co-founder Linda Fuller marks her 75th birthday with $75,000 fundraising campaign. The #Linda75 effort also includes a celebration at Columbia Theological Seminary in Decatur, Ga., a build day in Macon, Ga., an online auction and a celebration at Koinonia Farm with many of Linda’s longtime friends, including former First Lady Rosalynn Carter.

VivaCell-MTS, a long-time supporter of our work in Armenia, funds its 100th home through its partnership with Fuller Center Armenia.

3,500-mile Fuller Center Bicycle Adventure begins in Seattle, bound for Washington, D.C. Due to record participation, the ride is divided into an Orange Ride and a Blue Ride that departs one week later. The ride also will go on to break fundraising records, reaching its $250,000 goal in July and nearing $300,000 by the August conclusion.

Partnership with New Story a resounding success as first families begin moving into new Fuller Center homes in the Nuevo Cuscátlan community of El Salvador. Meet some of them here.

The international portion of the 2016 Millard Fuller Legacy Build is held in Armenia, where volunteers build homes for 12 families

Better Homes & Gardens Real Estate and New Story Charity announce that they will team up to support Fuller Center in building a second complete community in El Salvador — this one in Ahuachapan.

Albany Area Fuller Center for Housing responds to widespread repair needs after straight-line winds early in the month and a tornado later in the month cause damage.

With more than 20 former Habitat for Humanity affiliates having switched to partnering with The Fuller Center, an extensive report examines the reasons behind their move — reasons including local control, grass-roots principles, paying no annual fees and more. Full report.

Fuller Center Bicycle Adventure’s summer journeys begin on West Coast with fundraising goal of $400,000, which would bring ride’s all-time fundraising mark over the $2 million mark. The cross-country ride will go from San Francisco to Savannah, while the West Coast ride goes from Seattle to San Diego, to be followed by an East Coast ride from Portland, Maine, to Key West.

K’Hairi’s Christmas Wish two-week blitz build in West Point, Georgia. Volunteers complete home in partnership with Army veteran Carla Ross, whose son suffers from sickle-cell anemia yet asked Santa Claus each year only for his mother to have a decent house.

Fuller Center of Armenia builds its 600th home with volunteers from Christian Youth Mission to Armenia.

Latest independent audit shows 90 percent of gifts to The Fuller Center go directly to work in the field, among the highest percentages in the nonprofit world.