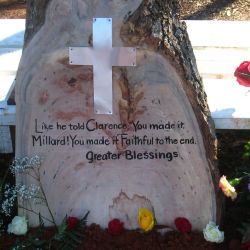 March: Louisville Fuller Center hosts the Derby City Build, renovating and building five homes to start a major revitalization of the Shawnee neighborhood on the West End — a project that continues to thrive today.

April 2: In an emotional homecoming, Marine Lance Cpl. Joshua Himan, is handed the keys to a home refurbished by the Northern Virginia Fuller Center for Housing, a home that is completely accessible for the wheelchair-bound veteran who was injured while serving in Afghanistan. The event garners national coverage from Fox News.

June: Faith Fuller, daughter of Millard and Linda Fuller, steps down after a longer-than-expected stint as Vice President of Communications, excitedly turning over the reins to veteran newspaper journalist and writer Chris Johnson, who continues to write a weekly humor column for the Columbus (Ga.) Ledger-Enquirer.

The Fuller Center of Greater Atlanta puts 400 lawyers to work in a special project with Hands On Atlanta in the Lakewood Heights area.

August: A Fuller Center team, including David Snell, Ryan Iafigliola and Kirk Lyman-Barner, visit operations in the Democratic Republic of the Congo. While there, the team sees some of the first houses built by Millard and Linda Fuller in 1973, when they launched the world’s affordable housing movement in what was then known as Zaire.

December: A team of six men representing The Fuller Center for Housing visit the site of a proposed home-building and peace-building project in North Korea one week before the death of North Korean lead Kim Jong Il. Fuller Center President David Snell puts a hold on work in North Korea until the situation is deemed stable and ready for work to proceed.

January: Fuller Center launches Save a House/Make a Home initiative to take foreclosed homes deemed “toxic assets” by banks and turn them into homes for families. It’s an initiative that benefits families, banks, communities and the housing market itself.

After years of working in Kankad, Nepal, The Fuller Center dedicates its first home in Trishuli, Nepal.

June: Work begins on the Katy Build in Bossier City, La. The new home build by Asbury United Methodist Church through the Fuller Center of Northwest Louisiana honors a service-minded 16-year-old who was killed in a 2006 car crash.

November: “Fuller Living” becomes first e-book published by Fuller Center. The book edited by President David Snell and Director of Communications Chris Johnson is a collection of 20 inspirational success stories with all proceeds benefiting The Fuller Center for Housing. Click here to order.

December: Roger Waters, formerly of Rock and Roll Hall of Fame supergroup Pink Floyd, donates $300,000 to build four new Fuller Center homes for veterans in Shreveport in what will become known as the Veterans Build.

April: Multi-Grammy-winner John Mayer shows up with a few lucky contest-winning fans to volunteer at Veterans Build in Shreveport.

April 28-May 2: More than 20 homes repaired during the 2013 Millard Fuller Legacy Build in Atlantic City, N.J.

The Mercer University women’s basketball team completes a groundbreaking first Global Builders trip to Ghana. Director of Communications Chris Johnson joins them in Africa and documents the final week of the journey in a special report with photos, video and story.

September: Fuller Center surpasses 100-house mark in Haiti and finishes the month with a total of 110 new homes in Haiti built since the 2010 earthquake. Read more.

The Hargrett Rare Book and Manuscript Library at the University of Georgia opens the Millard and Linda Fuller papers and Fuller Center for Housing records for public viewing and research. They are now open for research from 8 a.m. to 5 p.m. Monday through Friday. For more information, you can call the library at 706-542-7123.