A HFH affiliate in Gisborne, New Zealand, dedicates five houses one minute after midnight on Jan. 1, 2000, as part of the city’s “Gisborne 2000” Millennium celebration. Gisborne is the first city in the world to see the first light of the new millennium.

Decentralization of HFHI management continues as the Asia/Pacific office moves to Bangkok, Thailand, and the Africa/Middle East department moves to Pretoria, South Africa. 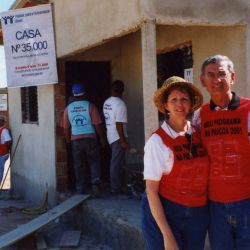 HFHI is now in 83 nations totaling a milestone 2000 affiliates worldwide.

Linda Fuller leads “Women Building A Legacy” launch in Denver, Colo. — 250 women building five houses in one week and celebrating the tremendous success of “First Ladies Builds” (participation of every First Lady of all 50 U.S. states) and now leveraging that to build a much larger base of resources for the Women Build program. The 250 women from U.S. were joined by 15 women from Northern Ireland for this milestone event. Now more than 400 HFH houses built by women or women led builds.

10,000 students from US; 20,000 in other countries participating in Collegiate Challenge

Millard Fuller’s eighth book published — First volume of “Building Materials for Life,” a collection of 40 inspiring essays which Millard bases on his life and faith experiences.

Millard Fuller named Georgian of the Year by the Georgia Association of Broadcasters.

JCWP in Durban, South Africa – 100 homes in five days as part of 1,000 homes built all over Africa in three months.

Jacksonville, Fla. HFH affiliate is the first in US to achieve 1,000 houses.

“Briars in the Cotton Patch” documentary on Koinonia released — produced by Faith Fuller, daughter of Millard and Linda.

Millard Fuller named CEO of the year among nonprofits in the U.S. by the Non-Profit Times.

March: Linda and Millard Fuller tour and spread awareness of Habitat’s work in Asia. Millard has disagreements with Habitat for Humanity International board.

August: Conflict with HFHI board continues. (Details in “The House That Love Built” by Bettie Youngs) Millard and Linda receive the Points of Light Medallion, recognized for philanthropic excellence by former President George H.W. Bush.