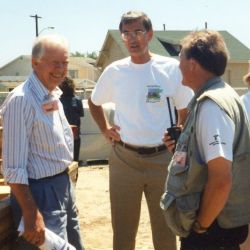 Millard and Linda Fuller’s book, “The Excitement is Building,” is published.

Bo and Emma Johnson, the first housing partners at Koinonia, pay off their mortgage. Event is celebrated with a ceremonial mortgage burning.

The first overseas Campus Chapter is formed at the University of Technology in Lae, Papua New Guinea.

HFHI’s 15th anniversary is held in Columbus, Ohio hosted by the former Ohio governor and HFHI board member, Dick Celeste

The Sumter County Initiative (SCI) is launched with the goal to eliminate poverty housing in Americus and Sumter County, Ga., by the year 2000.

The Entebbe Initiative is approved at HFHI board meeting held in Uganda, putting more responsibility for Habitat building outside the U.S. into the hands of National Partners.

HFHI completes its 20,000th house worldwide during a 20-house blitz build in Americus, Ga. The 20/20,000 Project kicked off the Sumter County Initiative (SCI).

The 1,000th Habitat house in India is completed. From Our House to Yours, HFHI’s first of three in the “Partners in the Kitchen Cookbook” series is published, edited by Linda Fuller

“The Theology of the Hammer,” Millard Fuller’s book outlining the biblical basis for HFHI, is published.

HFHI dedicates its 50,000th house worldwide in Pensacola, Fla., during the 1996 Building on Faith week. Habitat’s

50,001st house is celebrated in Mexico City, as well as the 6,500th Habitat house built in Mexico.

Habitat for Humanity begins building in its 50th nation, Romania.

Judging by popular support, HFHI is ranked in the top dozen favorite charities in the U.S., according to a November article in The NonProfit Times.

Leaders of the United States Congress kick off National Homeownership Week by beginning work with Habitat on “The Houses that Congress Built.”

Oprah Winfrey challenges her TV viewers to “build an Oprah house” and presents HFHI’s Board Chair Wayne Walker with a check for $55,000. Two years later, the program nearly met its goal of 200 homes nationwide.

Maxwell House concludes a two-year partnership with Habitat for Humanity in which the company donated $2 million in matching funds to promote the building of 100 Habitat houses in 100 weeks with 100 Habitat affiliates in the U.S.

Millard Fuller named one of “100 Most Influential People in Home Building in U.S.” by Builder magazine.

Millard Fuller named one of 20 Georgians who most influenced the 20th Century by the Atlanta Journal Constitution.

Jimmy Carter Work Project held in the Philippines — largest JCWP ever — 14,000 volunteers from 32 countries participating. The goal for the six sites of 293 houses in five days is accomplished.

HFHI relocates its Latin America/Caribbean office from Americus to San Jose, Costa Rica, in an effort to decentralize and move services closer to the field.