The middle school years are among the most transformative in people’s lives. It’s a time that boys and girls are shaped into the men and women they will become.

That’s why it’s fitting that Henry County Middle School sits squarely in the middle of the area that will host the U.S. portion of the 2012 Millard Fuller Legacy Build, an event that will be transformative for the McDonough, Georgia, neighborhood known as Blacksville. 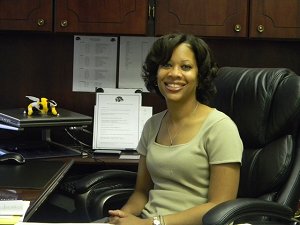 Among those keenly aware of how Henry County Middle School provides a symbolic backdrop for the Legacy Build is Dr. Kimberly Anderson, the school’s principal since August 2010.

“The middle school years are very crucial in the development of a child,” said Anderson, a St. Louis native who has spent 19 years in the education field and holds a doctorate in school improvement from the State University of West Georgia. “That is why it is important for us to focus on the social, emotional and educational needs of our students.”

Among those whose job it is to help meet the needs of those students is Pamela Carter, the executive director of Communities in Schools of Henry County, an affiliate of the statewide Communities in Schools program that aims to increase student achievement and reduce dropout rates. Her office is tied to Connecting Henry, where Shane Persaud is the Youth Development Program coordinator in addition to leading The Henry County Fuller Center for Housing.

“What I’m hoping to do is bring some resources that are in our community to the schools, not just Henry County Middle or Henry County High but all 50 schools that we have in the county,” Carter said. “We have more than 40,000 kids that go to school in Henry County. My job is to come in and try to provide those level one services — which is to make sure kids have basic clothing, they have food, they have utilities on at home, all of those necessities that many of us take for granted. My job is to make sure that I reach as many of those kids as possible in the schools and make sure that those services are available to them.”

Both Anderson and Carter appreciate what Persaud and the Henry County Fuller Center have done for the Blackville area since 2009 and know how much of a difference the Legacy Build can make this year.

“Shane has been quite instrumental with what I do through Communities in Schools because he works with me as the program manager for the Youth Work Force,” Carter said. “What Shane has done has put him in a position where he’s a lot of times in that community, what they call the Blacksville community, because a lot of our kids come from that area. So he’s in the homes. He actually sees the condition of the homes. He really has the heart for that community and for helping to renovate some of those homes because he sees some of the issues that they have there.”

Though he is an architect and leader of a Christian housing ministry covenant partner, Persaud’s passion is in building communities more than houses. He stresses the “holistic approach” of The Henry County Fuller Center’s work in the area.

“It’s about the families and about the children of our communities,” Persaud said recently as he walked along Holly Smith Drive, which runs between the school’s main entrance and a few of the homes that will be repaired as Greater Blessing projects. “If we can provide better services for them, then we can give them the tools that they need to excel in life.”

That’s music to Anderson’s ears as she aims to continue boosting performance at the school.

“My vision for Henry County Middle School is for it to become a high-functioning middle school with strong community partnerships,” she said. “Since the school is the heart of the community, it is important for all stakeholders to come together to help support the academic and emotional needs of students. This is important because the well-being of the community helps to make up the school and vice-versa.

“A decent house environment can help students have a certain pride and confidence about themselves that can spill over into the school setting.”

SENSE OF PRIDE CRUCIAL FOR MIDDLE-SCHOOLERS


Carter, a former teacher at Henry County Middle School where one of her eighth-grade language arts students was current Atlanta Braves superstar slugger Jason Heyward, believes that the Legacy Build will enhance pride in the neighborhood and help overcome negative perceptions that aren’t true.

“The principal even said she has had some people come to her and say, ‘I know you have something to deal with over there because your kids are illiterate. They can’t read.’ And she said that her heart dropped because her kids can read,” Carter said. “Dr. Anderson has a lot of good things going on in her school. It’s what they think about that particular area. That whole area needs to be beautified and have a sense of pride for that area again.”

And a sense of pride is crucial to the development of middle school-aged kids.

“They become much more aware of how people view them, how they view themselves and how they view their families,” Anderson said. “Further, peers become much more important to this age group, which in turn helps to influence how they see themselves and how they may view their families. During the middle school years, it is very important for students to feel like they fit into the social environment.

“I feel that what students are exposed to during the middle school years, in particular, helps to shape who they will be as adults.”

That’s why Carter believes there’s no time like the present to improve the community around the school.

“One thing that we do through Communities in Schools, as well as through our work with Connecting Henry, is trying to break some of these generational curses, breaking the cycle,” she said.

And nowhere in Henry County does that cycle of curses need breaking moreso than in the Blackville area.

“It’s like a forgotten community,” Carter said. “They know it’s there, but it’s not on their radar. This could really change the image and give the individuals who live in that area some pride.”

Click here to donate to The Fuller Center for Housing and support the 2012 Legacy Build.

Click here to read Director of Communications Chris Johnson’s blog about a visit to Henry County.