(Photo: Rachel and Stella Henderson moved into their new home built by The Fuller Center for Housing of Johnson County, Missouri, in April of this year.)

There are many ways Rachel Henderson can measure the joy of owning her own home in Warrensburg, Missouri.

She can literally measure the two-bedroom, two-bath home that is far less cramped than the apartment in which she and her daughter Stella had been living. She can count the dollars she is saving as her zero-percent-interest mortgage payments are less than what she had been paying to rent a small apartment. She can look out her windows and see a front yard and a back yard.

When she looks into the back yard, though, she sees the measurement that matters most — the huge smile on the face of 9-year-old Stella as she joyfully sails back and forth on a tire swing. Next week, Stella will turn 10 years old, and finally the family will be able to mark the occasion at home with a proper birthday party.

“It’s changed her life — she’s super-proud,” says Rachel, a licensed dental assistant who partnered with The Fuller Center for Housing of Johnson County Missouri to build their new home. “We’re going to have her birthday party in our home for the first time, which we’ve never been able to do before.”

The house was not officially dedicated until last month because of the coronavirus pandemic. It was on June 14 that Rachel was ceremonially handed the keys to her home and a Bible. Their lives, though, changed the moment the moved into the home on April 1.

“The neighborhood we’re living in is not upscale, but the Lord put us here perfectly because she already had two friends she knew, and then another friend moved in down the street,” Rachel said. “In apartments, it’s hard to know your neighbors because they’re constantly changing. Her life has been filled with going outside and riding scooters and bikes and playing on the tire swing in the backyard with the neighbors.”

The move also has eased some financial strain.

“It’s made quite a difference,” Rachel says. “You’re paying your mortgage, and insurance and tax escrow, and it’s less than my rent was. Also I have a beautiful backyard. Financially, it’s just amazing. It’s much less of a burden than rent that you’re just throwing away.”

A former Habitat for Humanity affiliate, The Fuller Center of Johnson County officially joined The Fuller Center in 2017. Their leaders then began spreading word about the change and explaining their affordable housing mission. Rachel and Stella liked what they heard when they learned about The Fuller Center at church.

It may have been perfect, but it was not easy. They performed more than their share of sweat equity as they worked alongside volunteers, and the project overcame numerous obstacles including the pandemic toward the end. The struggle was worth every drop of sweat and every obstacle hurdled.

“We built our home,” she says. “We worked here every day for a long time. Just knowing what goes into that, the sweat equity is more than just sweat equity. It’s a pride and a sense of ownership that you can’t otherwise get. Even if someone has a house built, you don’t quite understand what it takes to get this done.”

Not only did she and Stella put in the sweat equity required of every Fuller Center homeowner partner, but they also are grateful that their mortgage payments are a tangible way to pay it all forward. Fuller Center homeowners repay the costs of materials used to build home on terms they can afford to pay, over time, with no interest charged and no profit made. Those payments go into a Fund for Humanity to help others in their local community get the same hand-up into a simple, decent home.

“Knowing that we put so much work and labor and dedication into this home and paying a no-interest home loan is just phenomenal,” she says. “And every time we pay we’re getting that much closer to being able to build a house for another person.”

Those repayments are not the only way the Hendersons are paying forward the hand-up they were extended. Rachel has now joined The Fuller Center of Johnson County’s board of directors. She said that Executive Director Barbara Curtis thought she could be particularly helpful in the area of family partnering given how she has experienced the partnership process from start to finish.

“Whether or not I’m in a position like that, it’s just nice to know that I’m going to continue to volunteer and put efforts and time into the mission,” she says as her voice quavers with emotion. “After we got our house built, I knew this isn’t where it stops. I have to help other people.” 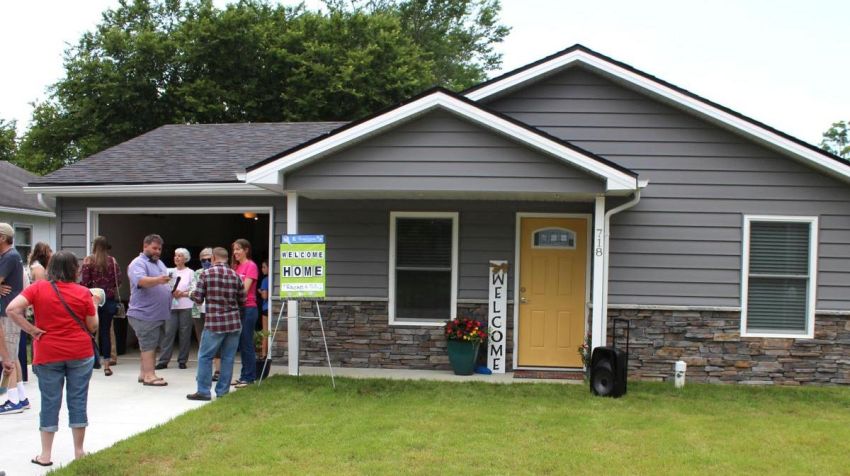