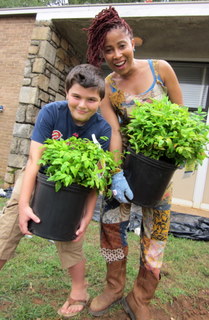 I would like to start today by wishing a happy birthday to one of the most wonderful, smartest, best looking, coolest and just dang near perfectest people I know – me. Yep, hit 41 today. That’s right, I’m on the other side of 40. Fortunately, I’m showing no signs of old age. Although, if you see where I left my keys, please holler.

Had a great weekend in Atlanta. Got to meet Mark Galey and some hard-working folks from the Greater Atlanta covenant partner as they renovated Fire Station No. 9 in the Adamsville community of Atlanta. Be sure to check out the pictures here and here.

Also got to meet HGTV’s Kimberly Lacy. After 22 years of meeting TV and music stars, politicians and pro sports stars, meeting celebrities usually isn’t a big deal to me. But I no longer have to be objective. And let’s face it, it’s hard NOT to love Kimberly. Keep an eye on this rising star. She’s not just lovable because she’s so down to earth and friendly, but she also does great work and is an outstanding ambassador for The Fuller Center. She plans to take an all-women’s team to Haiti in September to build at least five homes. And you’d better believe she’ll be getting her hands dirty and not just smiling pretty for the camera … though she’s equally capable in both areas.

She also won a fan in my son, Saylor, who got his first taste of a Fuller work site by immediately leaning against wet paint and getting it on his prized Jason Heyward jersey before we took in a Braves game. AND, Kimberly managed to put the kid to work! He loved every second of it. Wish I knew her trick! When I smile pretty, he just rolls his eyes!

Of course, Saturday’s job was a thank-you to first responders, but it was also a prelude to Greater Atlanta’s major Sept. 11 Memorial Build. Stay tuned for more on that as it draws near.

OK, time for me to blow out some candles on my cake. Hope they let them have a burn permit for this!