Of all the Superstorm Sandy-damaged properties being repaired during this year’s Millard Fuller Legacy Build, none is located closer to the beach than that of homeowner partner Louise Gordon.

Because of its age and proximity to Atlantic City’s beach, it may be the property that needed the most work, and that’s why veteran house leaders Charlie Thell and Tim DuBois of Minnesota are on the job. They knew they would need a well-organized crew of volunteers to get the job done. They got it in the form of 11 members from Hancock United Church of Christ of Lexington, Mass.

“I can’t imagine having a better crew. I’m just absolutely pleased as punch. We needed a certain skill level to pick this job up and run with it, and these guys fit in. They had a skill level that we could direct them and they could do the job without micro-supervision. In addition to their skill level, their attitude and determination fits right in.”

While many of the work crews at Legacy Build house projects are an assembly of volunteers from different parts of the country with varying skill sets, “Team Hancock” came pre-assembled. DuBois is a Legacy Build veteran, and he said that was key to getting off to a quick start on a property that needed so much work.

“Working with a unit, they don’t have that first day, find out what everybody’s limits are and personalities are,” he said. “They’ve got that basic rapport already established, so we save a day of that kind of stuff. Just about every one of them has done this kind of project as a group, so they came into this knowing in some cases what their roles were as opposed to the crew leader taking a dozen people that are not affiliated and determining that. That was predetermined. In this case, that was invaluable.

“They had the personal rapport, they had the skill set and, quite frankly, we ended up short of our allotment for volunteers,” he added. “If we had to be short, then we had the right crew to plug in. We could still use a few more. Whatever degree of success we have here is due in large part to these people coming in as a group. Everything that they brought to the table is what’s required on this particular house.”

Not only did “Team Hancock” come with a solid corps of experienced volunteers, but they also are helping to raise money for the repairs. They just recently launched a fundraising page through which they have raised more than $1,700 toward their $30,000 goal. 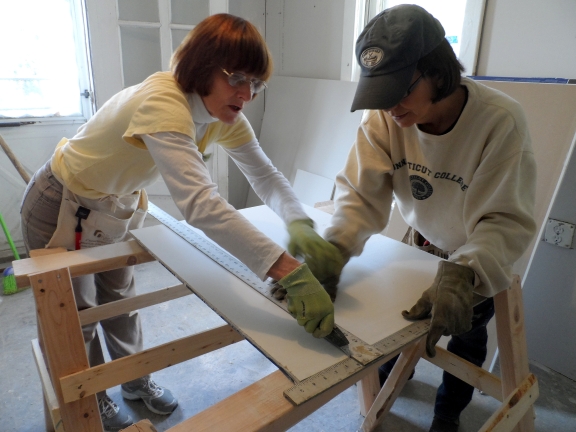 “We’re passionate about housing all over the world, and we’ve got a great group of people who decided to come here and help,” said Robin Digiammarino, who helped lead the fundraising effort along with Cheryl Kraley.

“When you see on the news that people have had these disasters that have changed their lives, it just hits you right in your heart, and you need to do something to give back,” Kraley said. “That’s why we do it.”

Her husband, Mike Kraley, said that while the team may come more pre-assembled than most volunteer teams, it is never the exact same group of people. But whatever the mix, he said it is a great way to get to know his fellow church members even better.

“We’ve done a lot of construction work at our church and on other mission trips, so it’s a great gang,” he said. “Each time we do this, it’s a little bit different crowd of people, so the personalities change and you get to know some new people. There are people here that I’ve known for 20 or 25 years and other people that have just joined the church recently or sort of come into the circle recently, so we’re still getting to know some of those people. You get to know them a whole lot better at something like this rather than sitting in a pew.”

The team working on Gordon’s home wasn’t composed entirely of Team Hancock members. They had some pretty high-profile infiltrators—including Fuller Center co-founder Linda Fuller Degelmann and her husband, Paul Degelmann. Also working on the house Tuesday was veteran volunteer Georgia Solotoff, who was able to drive down to the build from her home in northern New Jersey.

“This is my fourth build with The Fuller Center, and every experience is wonderful because I meet the best people from all over the country,” Solotoff said. “I feel like I’m very blessed, and for me it’s a good way to give back. And I get to hang out with Tim!”

But for Solotoff—just as it is for DuBois, Team Hancock and the more than 200 other volunteers who have converged upon Atlantic City this week — working alongside homeowners in need is about much more than getting together with old or new friends.

“I get a sense of reality about what other people’s lives are like in the world,” she said. “I feel like sometimes you get wrapped up in your own world and your own life and don’t see what’s around you. It gives me a different perspective on what people deal with, how people live and what their challenges are in life. It’s a good reality check.”

Speaking of checks, Solotoff got Tuesday’s work off to a great start at morning devotions when she presented a $4,000 check to The Fuller Center for Housing in the New Jersey Pines, hosts of the 2013 Millard Fuller Legacy Build. The money came from her local Rotary Club’s District 7470. She said they had been looking to contribute to a Sandy relief project and were excited to contribute to The Fuller Center’s work.

Contribute to Team Hancock’s fundraising page for the Legacy Build by clicking here!

See pictures from the Legacy Build on The Fuller Center’s Facebook page.