Hi, I’m Mihai Posteuca, I live in Portland, Oregon, originally from Romania. I’m writing about today’s ride from Martin, SD to Porcupine, SD. Today’s ride was a little bit shorter, but nevertheless, not easier because of very strong front and side winds. Porcupine is a small village in the Pine Ridge area. North of US 18 on the Big Foot Trail toward Porcupine you can’t help but for the next 15 miles admire the beauty of the rolling hills with the horses and cows grazing freely as far as the eye can see. Having a tail wind was not bad at all either.

The smell of the freshly cut grass gives the whole panorama a finishing touch that just a Divine Hand of a Creator can do.

A few miles down the road we hit “Wounded Knee”, a small place where American history was stained forever by the massacre of December 29, 1890 of the Minneconjou and Hunkpapa Sioux band tribes of 106 warriors and 250 women and children. They were surrounded by the US 7th Calvary of 470 soldiers. 146 women and children were massacred. Part of this history is captured in the movie Hidalgo, which I have probably watched 10 times. 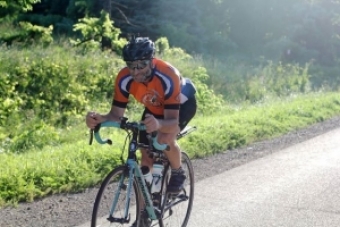 We are about half way through the journey, 1,800 miles of the total 3,600 miles to Astoria, Oregon. Riding on a bike for such a long distance gives someone a sense of pride of what formidable riders we are. But, once we hit the mountains and the head winds of the open plains, they have their own way to humble you in a hurry. This is going to be an adventure that will stay with me for the rest of my life, and hopefully will be an inspiration for others in my circle, and in my family, to do the same and learn how to “live simple so others may simply live.”

Special thanks to Melissa for her exemplary role model in leadership. God’s speed.