(Fuller Center communications specialist Leah Gernetzke is in Haiti documenting a week of building by a team of women from the U.S. This is her latest report.)

If it’s possible to live a lifetime in one day, today would be that day. Today is burned into in my mind and memory 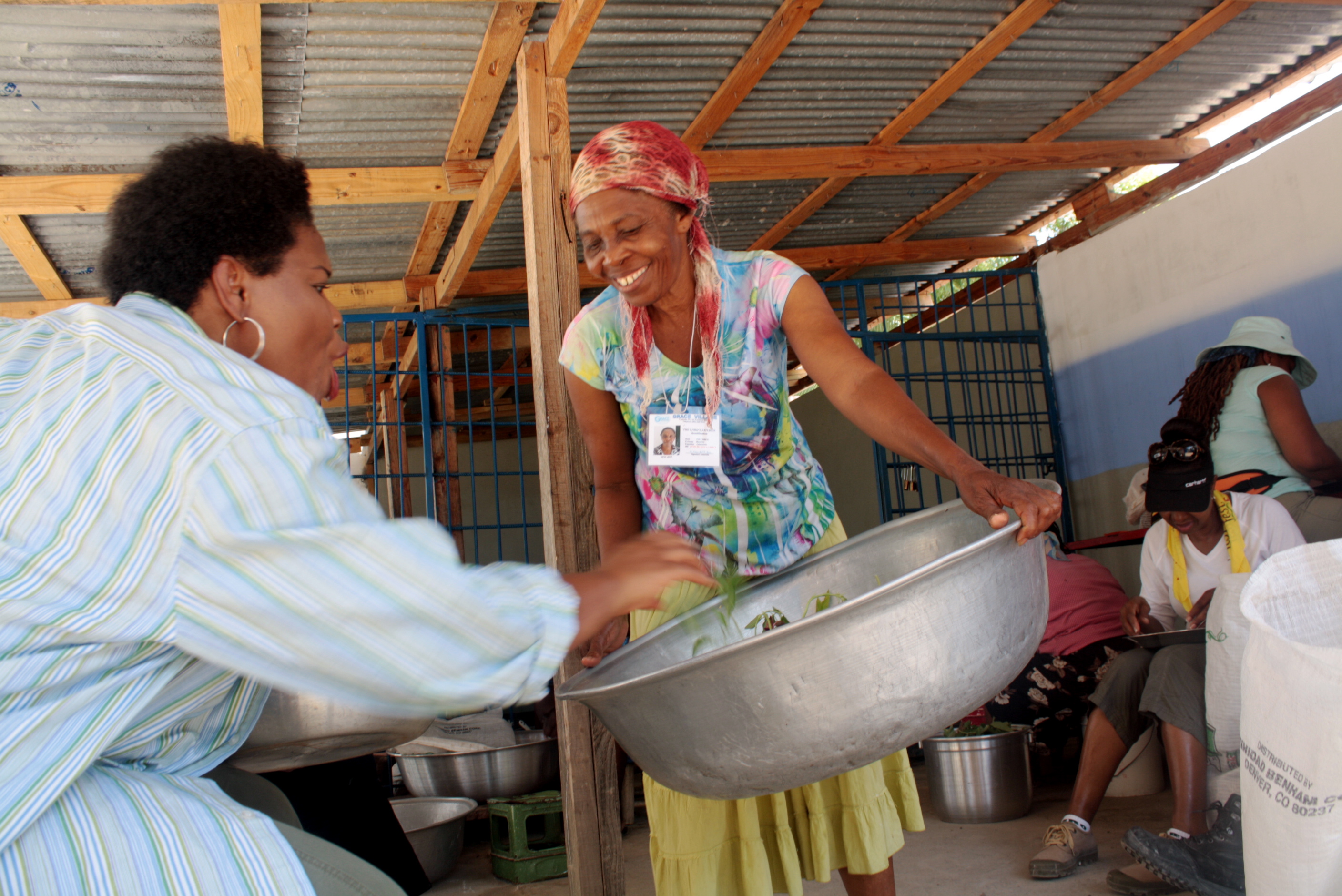 eternally. We were off the construction site, and so we got a break from building houses to build new relationships and insights instead.

In the early morning our group spilt in two – half of us went to the girl’s home (orphanage), and the other half helped a group of women prepare for the Lord’s Kitchen, a program run by Grace International that distributes rice and beans to the hungry children in the surrounding tent camp community.

The kitchen is a covered outdoor area in which women in colorful skirts and shirts pace back forth in well-worn shoes, standing over blackened and dented pots and pans that smell like supper. Their fingers search for stones in piles of black bean splits that come from a white mesh bag labeled “Peak Nutritional Power House. High fiber, low sodium.” They pluck stems off greens, knead bread, stir the rice, and sing and talk while preparing nourishment for the almost 500 kids who will soon pass through their kitchen. Our group sits with the women, mimicking the comforting repetition of movements passed through the ages. We also sing, laugh and talk. In this kitchen, we’re not business people or professionals or whoever we are in the States – we’re simply women providing food for children, and that womanhood creates a distinctly communal feel that transcends culture, age, and all other differences. 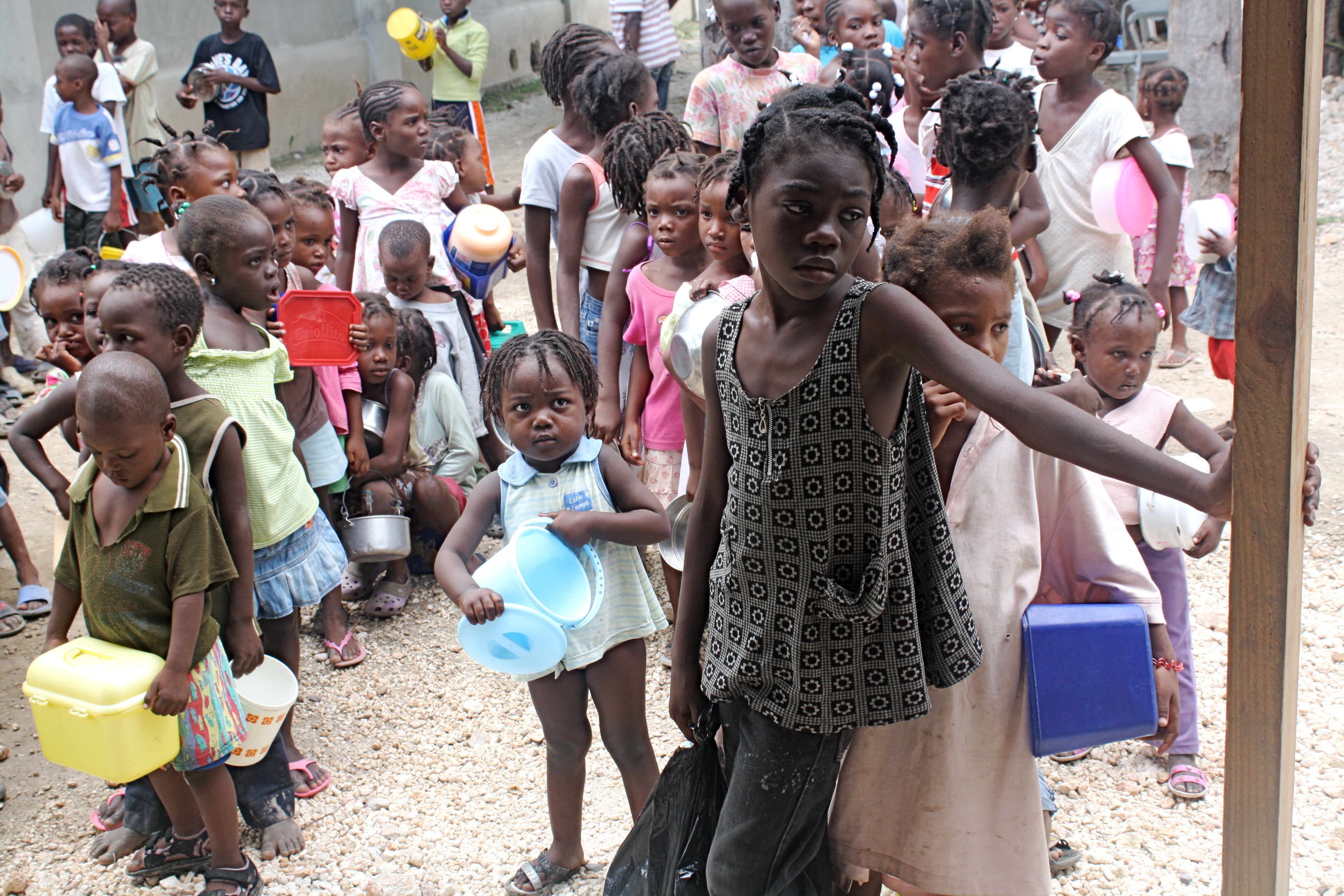 After a few hours of cooking, the gate to the tent community, located just 14 or so feet from kitchen, opened. At this action, children came pouring through under the watch of a security guard who keeps watch there. Each child carried a tin container or a plastic bucket. We were ready to dole out their portions, ready to serve these small hungry warriors of poverty.

What we were not prepared for was the way they poured out of the gates, the way they were herded through the line like cattle, for the heartbreaking looks in their faces as they patiently held out their tin containers, their soft-spoken “merci” whispered when receiving the food and tottered off, back to their dilapidated shack in a tent camp of 12,000 families. The food was also piping hot; too hot to hold for long without getting burned, but they held it anyway in their tiny palms.

Most of all, we were not prepared for when the food ran out, the gates closed on reaching hands with empty containers and innocent faces, the thumping noises as they begged to be let in, to be fed just a cup of rice and beans today.

For the first time, hunger became real to me, not a child on a screen, but a real, small, innocent human

standing so close I could see fine brown dust coating the miniscule hair on their arms.

We fed 486 children today, and at the end of that procession, not a set of dry eyes was among us.

But as one of our wise group members, Carol, said, “We’re not asked to do everything. We cannot feed the whole world. We fed 486 children and that’s what we could do today.”

But our day of service had only just begun. After we finished at the kitchen, we headed back across the yard in low spirits. They were quickly revived by Doris Jeune, a co-founder of Grace International and the orphanages there. She and her husband, Dr. Joel Jeune, prepared a birthday celebration for Beverly Black, our team leader.

Admittedly, at first the celebration was a bit of a bizarre contrast, and I unsuccessfully struggled at trying to eat a piece of frosting-laden cake after watching children walk away hungry just ten minutes ago. But Doris Jeune, or Mommy Jeune, as she’s affectionately known among the kids at the orphanage, served us a dollop of hope as she animatedly weaved her life story and reminded us that just one life has the potential to touch so many – a fact definitely worth celebrating.

“Every step of my life has been a miracle,” she said.

She spoke of how she was raised in an orphanage, the circumstances under which her mother gave her up, the faith that has kept her strong over the years, the hope she has for the Haitian nation, and of the integral role women play in that vision.

The latter was especially pertinent and relevant to our group.

“If we don’t change, if we are not an example to our husbands and children, there will be no change … we are so torn up, so self-centered, that we 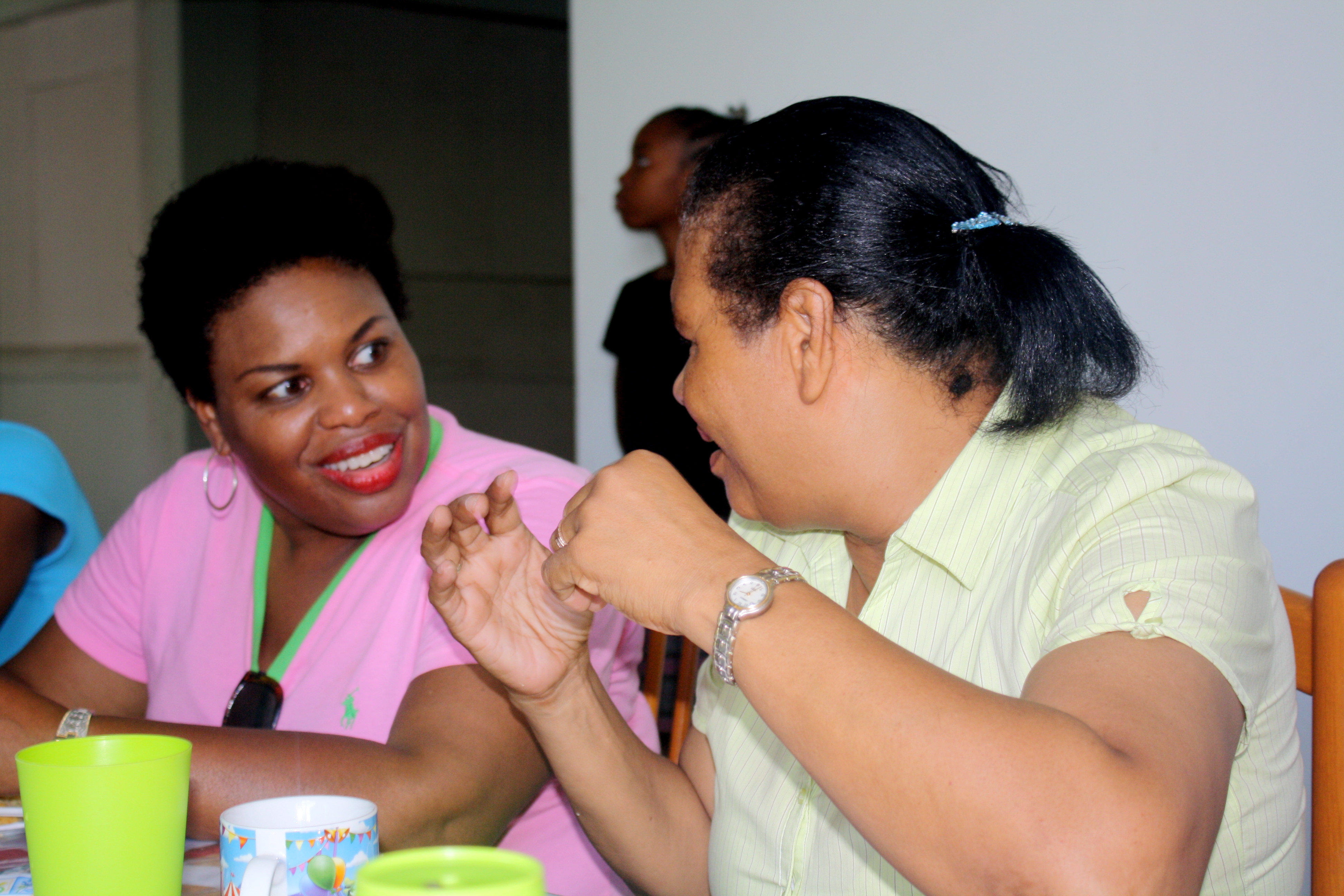 forget that we are the ones who carry the nation,” she said. “Some women want to kill themselves because they are women, and I say – lift up your heads!”

She said her goal is to empower women. Next year, she will hold a faith-based women’s conference for Haitians.

But after sitting around a table with her for an hour and drinking strong “Li Pi Bon” coffee straight from the Haitian mountains with this equally strong woman, I felt as if I already attended her weeklong conference.

But as she told us upon parting, “you are here to learn and take it back to your country” – so perhaps that was her intent.

And so we left with higher spirits than when we came in, intent on carrying out our mission as women and faith-filled people.

More beacons of hope were just around the corner, quite literally. We walked back through the tent camp, and this time stopped at an English school and met the teacher, James Jean, a 22-year-old Haitian man so committed to helping the people of his nation that he doesn’t even mind not getting paid for his work in the camp, even though the job is undoubtedly difficult with so few resources.

“We have to share knowledge,” he said. “ It’s a great thing to share what you know … we have a vision to start an English language institute.”

In his spare time, he said he attends a nearby college and studies linguistics.

On our way through the camp we also passed by a small oblong tent filled with women and children. I asked our guide/security guard what it was, and he said it’s an informal school for new mothers to teach them parenting skills. He also pointed to one of the tiny baby girls crawling on the floor with a certian gleam in his eye, and then to himself. “My daughter,” he said.

We also passed an open, crumbling tabernacle with light streaming through it, where women were singing

and praying. I asked what they were doing, and our guide replied that they were fasting in order to give thanks for what they have, which is not uncommon, he added.

I realized on this second walk through the camp that although the people here may be economically impoverished to a desperate degree, they are extremely, almost bafflingly, affluent in personal connections and community, in love and in faith. This is the currency on which their lives are run.

Once out of the tent camp we went to the orphanage again to pass out dresses and books for the girls that we brought from the States for them. They tried the colorful new dresses on over their clothes and twirled around the room. At the end of this long journey of a day, their simple, unadulterated joy was an apt reminder of why we came, and perhaps for some of us, what we need to hold on to.

View more photos from the Haiti trip by clicking here.