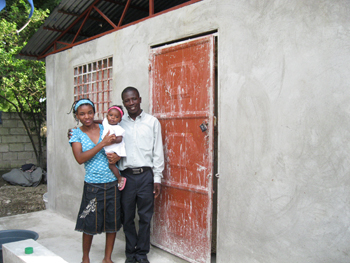 The Fuller Center for Housing just completed its 10th home in Haiti in response to the 7.0-magnitude earthquake that devastated the country 10 months ago on Jan. 12.

“We’ve built six homes in Leogane and four in Saintard,” said Fuller Center President David Snell who recently returned from Haiti. “The number looks a little modest until you realize that these are among the small percentage of permanent, affordable houses that have been built there since the earthquake.”

With 10 houses now complete–and processes and land in place–the organization’s homebuilding efforts are accelerating. The Fuller Center currently has enough land in Leogane to build a total of 30-50 houses and additional land is being acquired in a village called Balan for the construction of another 50-100 homes. Two Fuller Center volunteer teams from the United States have already traveled to Haiti to help build. Another 12 teams are lined up for 2011. 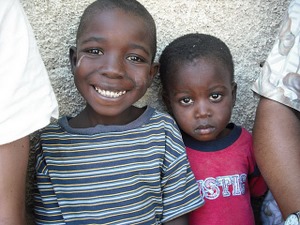 “We now have the infrastructure in place, so we can build houses as fast as we can get people and money to build them,” Billy Ponko, head of Haiti operations for The Fuller Center, said.

An average Fuller Center home in Haiti costs $3,000 – $4,000. Labor is provided by homeowner families, as well as some paid local labor and volunteer teams sent from the United States.

“The 10 families we’ve been able to help so far are tremendously grateful for the opportunity to move into a decent, affordable home,” Snell said. “This is not a giveaway. Each family has been helping with the construction of their homes.”

“With more than a million people living in tents, we feel a great sense of urgency to help as many people as possible,” Snell said. “We’re at the vanguard of the permanent housing movement in Haiti. What we need are people of goodwill to come forward and help us take this to the next level.”

To learn more about and stay up-to-date with the progress in Haiti, check the Haiti pages often.

And find more about volunteers opportunities with the Fuller Center in Haiti here.