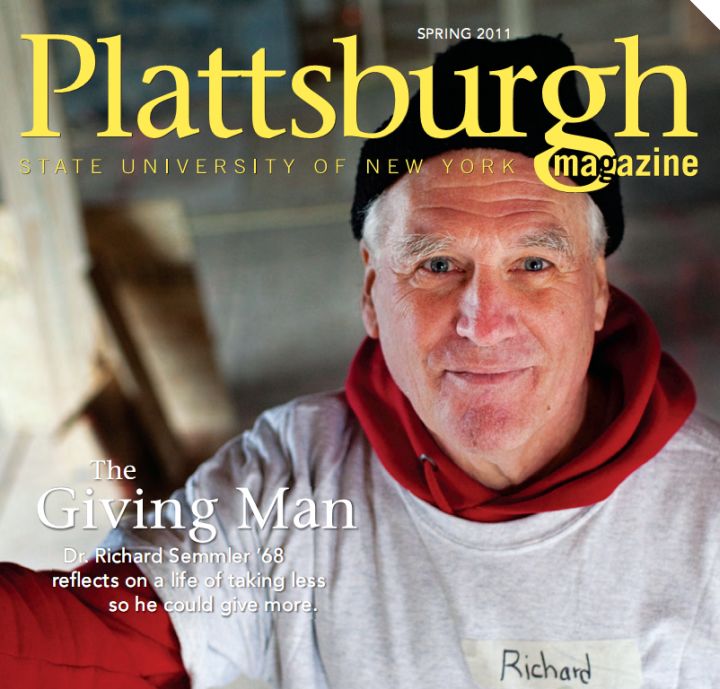 , Internet service or cable television. He drives an old car and buys clothes and furniture at thrift shops. He has part-time jobs in addition to his full-time employment, and he’s never taken a vacation.

He’s also given more than $1.3 million to charities in his lifetime and donates half of his income to charitable organizations every year. And when the mathematics professor is not teaching at Northern Virginia Community College, he likely can be found hammering away on a home for a needy family or serving meals to the homeless at the Central Union Mission in Washington, D.C.

Among his many donations was a $12,000 gift to The Fuller Center for Housing to build four houses in earthquake-ravaged Haiti. Dr. Semmler and The Fuller Center challenged others last month to match the donation.

Karen Warkentien has matched it in one fell swoop.

Warkentien is an active Fuller Center volunteer who has become more well-known as “Toolie” on work sites. The regulatory affairs consultant with Lewis and Harrison LLC in the D.C. metro area is so inspired by Dr. Semmler’s nonstop giving that she matched the entire $12,000.

“Richard is someone who lives so frugally and, yet, has given away millions,” Warkentien said. “I think he is one of the most amazing people I’ve ever had the opportunity to know. 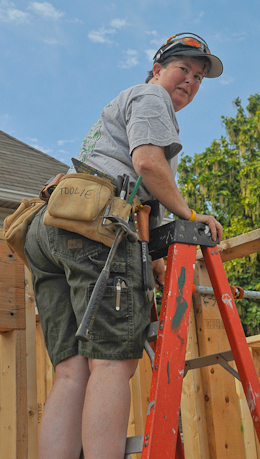 “He’s the same type of person as Millard Fuller,” she added, referring to the founder of The Fuller Center and Habitat for Humanity, through which she and Semmler first became acquainted in northern Virginia. “He has that same sort of drive and determination, though Millard was more overt.”

“I can’t thank Karen enough for stepping up to the plate – this is really good news,” Dr. Semmler said upon learning of the match. “It really was worth it to have this challenge. This helps four more families.”

“With friends like Richard Semmler and Karen (Toolie) Warkentien this great work is bound to succeed!" Fuller Center for Housing president David Snell said. "Last month Dr. Semmler sent us $12,000 for Haiti and agreed to have it as a match. Now Toolie has come forward to meet the match! There’s a great opportunity here for others to step out and match the matches — all to the benefit of the poor folks in Haiti who have suffered too much and are patiently waiting for our help.”

The Fuller Center’s Global Builders program already has four more trips to Haiti planned for this year – two each in August and September, including a team wholly comprised of African-American women, which HGTV star Kimberly Lacy will lead. Two more trips to Haiti are planned so far for 2012, in January and July. More trips are likely to be planned.

“There’s so much yet to be done there,” Warkentien said. “I had a friend who did a build down there in March, and she was very taken with the folks down there and the work that’s been done. But she said there’s still so much to do. Anything we can do to build that up is important. We need to live globally and not just locally.”

Like Dr. Semmler, Warkentien is not the type to simply hand over money and be done with her charity. She’s been active on build sites with Habitat and The Fuller Center. She will be at the Millard Fuller Legacy Build in Minden, La., Oct. 17-21. It was at a similar build that she long-ago earned the nickname “Toolie.”

“I didn’t know what to bring, so I just loaded up my truck with every tool I had and headed to LaGrange,” she said. “After a while, everybody started coming to me for tools.”

She hardly minded being referred to as “The Tool Wench” before it morphed into “Toolie” because of her affection for The Fuller Center, its founder, and its volunteers and supporters.

While Dr. Semmler’s generosity may have inspired Warkentien’s matching donation, her response has only inspired Dr. Semmler to want to do even more. He said he intends to make another donation this year that may be divided to help further The Fuller Center’s work in Haiti and the tornado-ravaged Alabama community of McDonald Chapel. And, like his friend “Toolie,” he wants to do more than just give money to the projects.

“I make sure I see where the dollars go,” he said. “That’s why my money goes to very specific projects. … If some of my money goes to the project in Alabama, I want to go to Alabama and help build those houses.”

Warkentien would expect nothing less from Dr. Semmler.

“Richard is just a phenomenal individual,” she said. “He puts his faith into action. I look at what he gives, and it’s monstrous. It’s more than most folks give in a lifetime. I wish I could be more like him. It just shows how much we all could do.”

Contribute to The Fuller Center’s work in Haiti here.

Read a blog about Dr. Semmler and Toolie.

Watch Dr. Semmler in action at a soup kitchen: