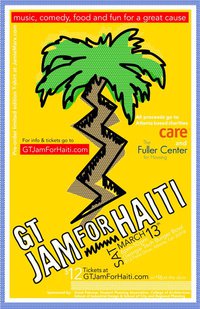 When passionate Tech students aren’t spending their 72-hour days on studying, they are dedicating 72-hour days to a noble cause.

Jesse Clark, an MCRP grad student, and several others from student organizations have spent the last month organizing the GT Jam for Haiti: a benefit concert to relief for Haiti.

The concert will host four prominent local bands, several comedians from the Laughing Skull Lounge and improv performances from Dad’s Garage. The event starts Saturday, March 13, at 6 p.m. on the south side of the Burger Bowl. Ticket prices are $12 in advance or $16 at the door.

Clark expects for the turnout to be in the thousands, with all proceeds donated to CARE relief agency and The Fuller Center for Housing—major Atlanta-area nonprofits involved in relief and rebuilding in Haiti.

“A concert seemed like a great idea; everybody loves music, and it’s something to bring everyone together versus just asking people for a donation or a handout,” Clark said.

The concert will start with an introduction by the Atlanta Haiti Alliance, followed by alternating stand-up routines by Laughing Skull Lounge comedians and local bands—Do It To Julia (folk-rock), Heavy Mojo (hip-hop and rock), Teddy and the Bears (alternative rock) and Third Creek (hip-hop, rock and R&B). Finally, the improv comedy troupe from Dad’s Garage will perform. Continue reading >>

Check out GT Jam for Haiti’s Web site for details!

Learn more or donate to The Fuller Center’s recovery initiative on the Haiti page.