For 17-year-old Sam Girian of Manchester, Mass., the 2016 Millard Fuller Legacy Build in Vanadzor, Armenia, wasn’t just another service trip. It was an opportunity to learn about himself and the world around him.

The high school junior isn’t short on life experience: He lives away from his family at a rigorous college preparatory boarding school — Groton in Groton, Mass., which has produced such notable alumni as Franklin Delano Roosevelt. There, he plays on the school’s football team and volunteers at a local food pantry. Still, he couldn’t shake the desire to “get out of the New England bubble.” 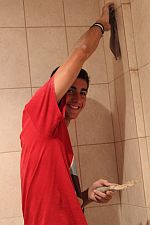 Eager to experience his Armenian heritage firsthand, Sam did a simple Internet search and found himself on the Fuller Center for Housing website. “I liked the authenticity of the organization. It’s an organization that is close to its roots and has a clear purpose for what it wants to achieve,” Sam said of his first exposure to the Fuller Center. Soon, both he and his mother were registered for the weeklong build.

The build focused on a 12-family apartment building, in which no family knew which apartment would ultimately be theirs. Families worked diligently all week to better their building as a whole, participating in a drawing at the end of the week that assigned their home.

“It was special to see all the families celebrating their new homes with food and drinks and people from around the world,” Sam said of his favorite part of the build. “The building was packed with extended family, volunteers, government officials, a priest, and even a national news channel crew.”

While Sam did mention construction skills as something learned, he is most thankful for the real-world lessons the build taught him. “I learned about people. I learned about how other people live and other people’s culture.” The high school junior had never been to Armenia and left feeling a deeper sense of understanding of his own heritage, especially after visiting the Genocide Museum in Yerevan.

“On the trip my mom and I realized that service trips are a way of seeing the real world. People usually travel abroad for vacation and go to the best-looking places on Earth. The service trip with The Fuller Center took me to a real part of Armenia that regular tourists would probably never witness.”

Honor Sam’s work with
a donation in his honor