One of the most circulated quotes by Millard on the internet is “For a community to be whole and healthy, it must be based on people’s love and concern for each other.”

As I’ve taken pause to reflect on the beginning of the Advent season, I’ve been curious about how the life of a baby could possibly transform the world.  Even with all the chaos, conflict and economic challenges we have been reading about in the news lately I’m constantly looking for Good News in all the madness.  A Google Alert delivered just what I was looking for during the Thanksgiving break in a Shreveport Times story titled“Options expanded in Shreveport’s Allendale neighborhood.”  I’ll share this Good News below, but first some background information.

The Allendale neighborhood was the first major construction project in the U.S. for The Fuller Center for Housing.  Invited to the community following hurricanes Katrina and Rita by Community Renewal International’s founder Mac McCarter, several of us traveled to visit the neighborhood. What we found was unimaginable in the United States.  There were blocks and blocks of shotgun houses, most of them vacated and boarded up, but others home to squatters, prostitution, gangs and crack houses.  I’ll never forget our first visit there.  As we toured the neighborhood, drug deals were being made out in the open, and an ambulance was responding to what appeared to be a shooting.  A homeless woman was trying to cross a hilly street when her shopping cart, overflowing with ratty clothes and blankets, tipped over.  I went over to help her and the woman began screaming at me to leave her alone.  It was clear to me that Shreveport and the community of Allendale were dealing not just with the aftermath of the weather storms; they were dealing with a tougher systemic economic storm. 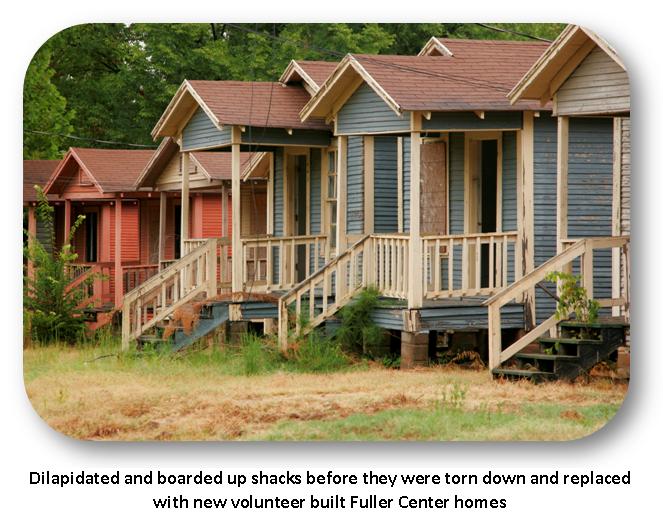 Allendale was a “food desert” –an urban area without easy access to grocery stores.  The only nearby commercial establishments were convenience stores that earned the majority of their income from sales of malt liquor and lotteries.  I saw a young pregnant mother getting groceries from the trunk space of an old Chevy Monte Carlo.  She was carrying bags and gallons of milk for her children into one of the shotgun houses. After being paid, the river sped off.  I knew right away what I was seeing from my days at Pittsburgh Theological Seminary. According to Wikipedia, in Pittsburgh, jitney refers to an unlicensed taxi. They are plentiful in low-income communities where regular taxi service is scarce. As enforcement is lax, jitney drivers have even created cooperatives to support each other and to establish jitney stands. They are known to gather at the parking lots of grocery stores in low-income communities. Some jitney drivers accept requests for service by phone from their regular customers. The issue of whether to legalize jitneys has been considered several times by Pennsylvania’s Public Utilities Commission since at least 1975.  Famed Pittsburgh playwright August Wilson wrote a play called Jitney, which was published in 1982. 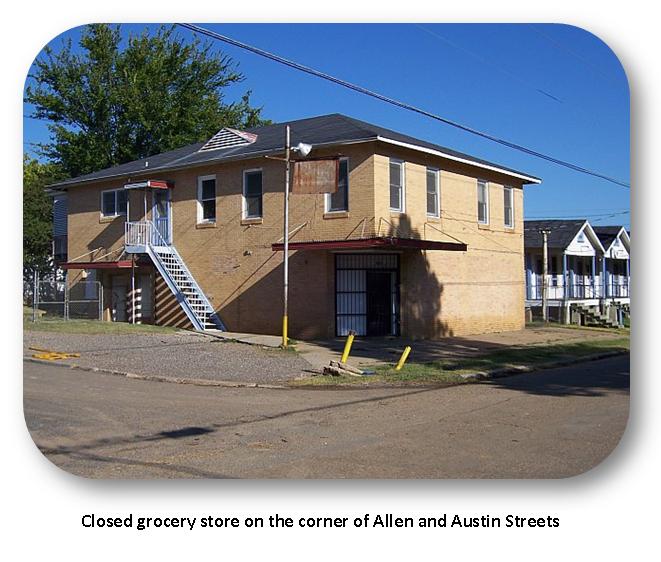 Major grocery chains will rarely open in a low-income neighborhood in the United States because of the cost of crime, worker safety and shoplifting.  Not having local access to affordable healthy food only exacerbates the plight of the poor as poor health increases health care costs, slows students’ learning capacity and local dollars quickly leave the community.  I spied one abandoned and locked up grocery store.  David Snell and I inquired about the store after seeing groceries still on the shelves as we peered through the bars on the front door.  We learned that two brothers owned the grocery store, but it had been closed after one of the owners was shot in the head in an armed robbery.
John Perkins, founder of Mendenhall Ministries, pointed me to the following illustration:
What if the week after the Samaritan picked up the wounded man, he came again down the same road toward Jericho and found another victim? Then it happened a third, fourth and fifth time. Don’t you think that after taking care of the victims he would have gone to the authorities with suggestions on how the road could be made safer?
After reading the above illustration my friend Chuck Wilbanks shared a quote by Martin Luther King, Jr:
One day we must come to see that the whole Jericho road must be transformed so that men and women will not be constantly beaten and robbed as they make their journey on life’s highway. True compassion is more than flinging a coin to a beggar; it is not haphazard and superficial. It comes to see that an edifice which produces beggars needs restructuring.
Back to the article and the Good News.
Reporter Adam Kealoha Causey observed that in Allendale in addition to the old shotgun shacks left over from a failed HUD Section 8 housing program, the formerly thriving neighborhood had decayed into many buildingless, overgrown lots: 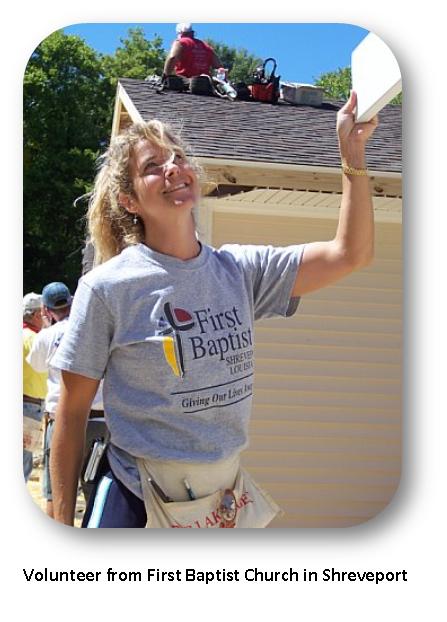 But the article also documents that things are changing because of some Christian ministries who came together to work in Allendale. Building on the work of Community Renewal’s Friendship House program, The Fuller Center, under the leadership of our Director of US Field Operations Glen Barton and his wife Brenda, built community collaborations with the city, churches and other housing programs to build homes for Allendale residents and families who were forced to flee the Gulf after the storms.  Through our Greater Blessing program we also renovated existing homes for elderly homeowners who couldn’t afford to keep their homes from deteriorating.  In three short years, 40 new homes were built by the volunteers and 23 Greater Blessing renovations have been completed.
Rosie Chaffold is still taking care of the Allendale Garden of Hope and Love.  She’s seen a lot of good changes in the past few years.  The garden has grown from beautiful flowerbeds to include vegetables which she shares with her neighbors free of charge.  Many volunteer in the garden and when they do, Rosie says they feel a little closer to God. (To read more about Rosie see Shane Bevel’s blog)
One big sign of hope is a newly opened Dale Street Grocery and Deli which is managed by Allendale native Claude Marshall.  He doesn’t sell alcohol because of the devastating effect it had on the neighborhood and he told me that he signed a covenant when he joined Shiloh Baptist Church agreeing not to sell alcohol.  To do so would be “hypocritical” says Marshall.  He is intentional about helping Allendale residents reduce the cost of transportation to get groceries.  Currently Shreveport’s jitney drivers are charging about ten dollars to take someone to a grocery store.  Marshall says, “Sometimes ten dollars is all they’ve got.”  Dale saved his own money and with the help of family members he was able to purchase the store building at a great price.  The city was going to tear it down as it had been gutted by fire.  Since the building was still structurally sound, Marshall was able to rebuild the roof and walls.  He bought some shelving and equipment from the old store on the corner of Allen and Austin.  In addition to groceries, the Dale Street Grocery and Deli is catering and offering barbecue.  On December 13th, The Dale Street Grocery Store and Deli will celebrate its first anniversary and they are in the black and profitable.
The Fuller Center for Housing of Northwest Louisiana (Shreveport) Executive Director Lee Jeter has high hopes for that old store building on the corner of Allen and Austin Street. The board of directors just purchased it this past Monday and they want to put the Fuller Center offices on the top floor and a grocery store on the bottom floor.   They also bought four adjacent abandoned shotgun shacks.  They will be torn down for parking and perhaps another build site.  One of the homes may be preserved as a museum to show visitors and community organizers how far they have come.
Claude Marshall isn’t threatened by the prospects of another grocery store in Allendale. In fact, He has served as a consultant to Lee and the Shreveport Fuller Center Board. Claude helped negotiate the sale of the old store building to The Fuller Center.

There are good people in Allendale, and the police are reporting that crime is way down.  Lee Jeter gave me an incredible update from the local Shreveport police:

The crimes stats for the Allendale area (not just the blocks that have Fuller Center Housing) is down 56.01% since December of 2005 when the Building on Higher Ground project begin.

We consider several factors to contribute to the reduction.  (1) the influx of new homes and homeowners into the area, (2) the destruction of blighted and abandoned properties, (3) The relationship between the community and the Community Renewal Friendship Houses as well as establishment of an active neighborhood watch program.


Love and concern is a willingness to look at our neighbors in need of the basics like food and housing and jobs and figure out how to empower each other to build community as best as we are able.  If we follow the example of people like Claude Marshal and Rosie Chaffold with a little imagination and a little community organizing amazing things are possible.
In the 16th Century, Menno Simons wrote “True evangelical faith is of such a nature it cannot lie sleeping, but spreads itself out in all kinds of righteousness and fruits of love.”

I want to close by inviting you to join us in Shreveport this January for our Covenant Partner Conference Friday, Jan. 15th to Sunday, January 17th to see firsthand some fruits of love what Millard meant when he said “For a community to be whole and healthy, it must be based on people’s love and concern for each other.”  I promise you will be inspired!