AMERICUS, Ga.– When the Americus-Sumter Fuller Center for Housing decided to tackle the project of building a duplex home for Chuck Davis and Thad Harris, there were considerations that stretched beyond building a simple, decent home for two deserving men.

With each man confined to a wheelchair — Chuck because of cerebral palsy and Thad because of a truck accident that left his legs paralyzed — the homes also needed to be completely accessible for the disabled. And with each man on fixed incomes, they would need to be energy-efficient to keep utility costs manageable.

The goals were accomplished — and then some.

When the homes were completed in late fall of 2010, an independent energy-efficiency audit was performed by local contractor Nevil Eastwood and energy rater Dick Edwards of Florida. The home received an Energy Star rating and was certified a “Gold” level green home from the National Association of Home Builders’ Research Center, an extremely rare high rating.

“For a volunteer-based organization to score a bronze rating on their first house would be like hitting a home run on your first at bat,” Edwards said at the time. “To score a silver rating would be incredible. A gold rating on the first try is unheard of.”

Also unheard of is how much this rating paid off in terms of utility bills. Harris allowed The Fuller Center to examine and share his electric bills for the first 12 months he and wife Leala have lived in the duplex. The numbers for a South Georgia area that occasionally sees below freezing temperatures in winter and regular brutal heat in the summer are astonishing.

From December 2010 to November of this year, the Harrises’ average monthly bill from Georgia Power was $49.42 with an average kilowatt hour usage of just 11 kWh per day. The average bill for other Georgia Power residential customers during that same period was $113.96 per month, 57 percent more than the Harrises’ bill. 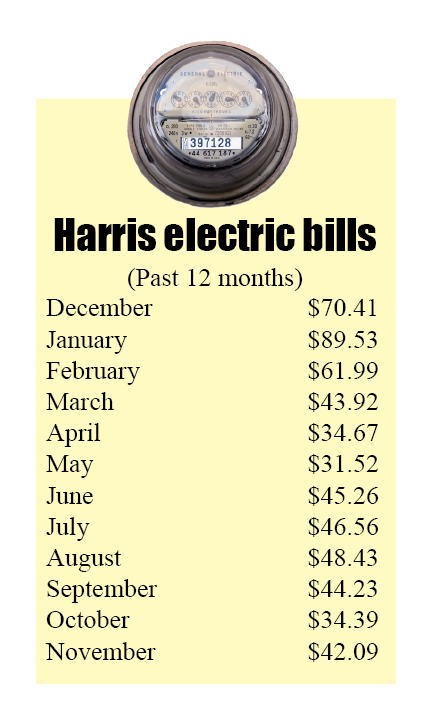 “The phenomenally low electric bills are the direct result of the collective wisdom of our planning team’s experience,” said Fuller Center Director of U.S. Field Operations Kirk Lyman-Barner, who led the Americus-Sumter covenant partner during the build. “It is hard to imagine that a husband and wife could heat and cool their home, wash their dishes and do their laundry for an entire year for less than a $50-per-month utility bill.”

Lyman-Barner, who has made green building one of his priorities on the U.S. side of Fuller Center operations, said that the use of structured insulated panels for the walls and roof along with a design that kept most of the air-conditioning and heating duct work inside the conditioned building envelope were among the most important decisions made in the project.

“We set out to make ‘energy-efficient’ synonymous with ‘affordable housing’,” he said. “And we have demonstrated that it is possible with thoughtful design and selection of conventional building strategies.”

While Edwards expected Gold levels of energy-efficiency, even he marveled at the levels of savings the Harrises have witnessed.

“This is a great success story,” he said. “What is remarkable is this last year was a very hot summer, and the outstanding tightness of the house combined with the outstanding thermal insulation of the SIP panels did not show a spike in cooling costs. Based on the initial REM/Rate software analysis, the energy costs are 20 percent less than originally calculated.”

Learn more about the Americus-Sumter covenant partner by clicking here.

Read a Q&A with Kirk Lyman-Barner about green building.

In Thad Harris’ own words, what this project meant to him.

Click here to donate to The Fuller Center for Housing.