There are many interesting Fuller Center for Housing programs, but one of the most intriguing is the Global Builders program. I think it’s because so many people want to see the world but prefer to see it off the beaten path. 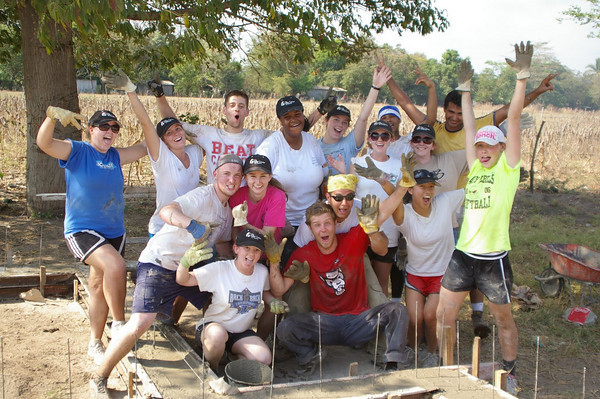 The Fuller Center’s Global Builders program certainly helps them do that. It’s not like we build a lot of homes in the high-rent, touristy areas of Paris, London, Rome and Tokyo. We’re well off the tourist trail in places like El Salvador, Peru, the Democratic Republic of the Congo, Armenia and Haiti – not exactly Monte Carlo.

Not having been here even two months, I haven’t had a chance to experience one of these places – although I did once ride a bus under the Detroit River to visit Windsor, Canada. Wow! Those Canadians have such a strange and unusual culture, eh?

But while I haven’t had a Global Builders experience, many have. And this year has been our biggest ever for the program, shattering records for trips from previous years. Judging from all the photos I’ve seen, the folks really seem to have a great time while helping others. You can see a lot of those photos by clicking here.

One of my favorite batches comes from a trip to El Salvador earlier this year involving a group from N.C. State University. This group really looked like a fun bunch. And since I haven’t been, I thought I’d give up the rest of my blog space today to someone who was on that trip and offered a little write-up about it. So here’s what Casey Miller had to say about the trip:

Teamwork. This is the first word that comes to mind when asked to describe the teams of volunteers and the Fuller Center. We were able to efficiently complete our team goals and personal goals in a way that went above and beyond our expectations. We would not have been able to do so without the large amount of planning that the Fuller Center did before our arrival.

The experiences that our team members went through on the worksite were physically, mentally, and emotionally draining. Nevertheless, it was through these experiences that we learned more about ourselves and about how much we are capable of. Every person on our trip came out of El Salvador with a new respect for ourselves, our team members, and the El Salvadorian people and culture.

Throughout the week, our team did a lot of shoveling sand and gravel to form the foundation of the house we were working on. The most difficult day of our build was halfway through the week. We moved over 10,000 lbs of cement and lifted bucket after bucket of cement up 12 ft. The buckets were then poured into metal structures so that it could dry and create the walls of the house. In order to do this amount of work in one day we had to form an assembly line. The teamwork involved in the assembly line was phenomenal. Not one person had to be told what to do or where to go. Everyone just went to the position that they would be of the most help and stayed there until the job was done. In addition to doing our own jobs, every team member kept an eye out for other team members who needed a break and they would step in and cover his/her spot until they came back hydrated and feeling well.

Sarah Smith, a member of our team, recalls the time when she was most surprised at how organized we were. “I have been on similar service trips before, but I had never seen a team come together and accomplish so much work in such a short time. Everyone on my trip got along so well and it really showed on the worksite. We were able to complete the walls in a four-room house in less than seven hours. We were told that our team set the record for doing so. We felt really proud of ourselves after that day.”

During our time at the work site, we had the chance to get to know some of the people who lived in the community. These people were some of the most hardworking, caring, and selfless individuals that we had been exposed to. A few of the members of the community helped us during our construction of the house. Not once did they complain about the heat or the amount of work. While we were taking water breaks, they continued to work. In addition to their work, they made sure that we were drinking enough water and were feeling good. Caring about another person’s health above their own is something that our team witnessed often in El Salvador. We were exposed to good attitudes and great personalities all week.

This trip was more than we could have ever asked or hoped for. We have never been so proud of ourselves both personally and as a group. This experience taught us a lot about ourselves. We recognized and surpassed our limits for hard work and continuously encouraged other members of our group. Even though we only spent one week in El Salvador, our group came home with memories that will last a lifetime.

Click here for more information about Global Builders, to join a trip or propose a trip.