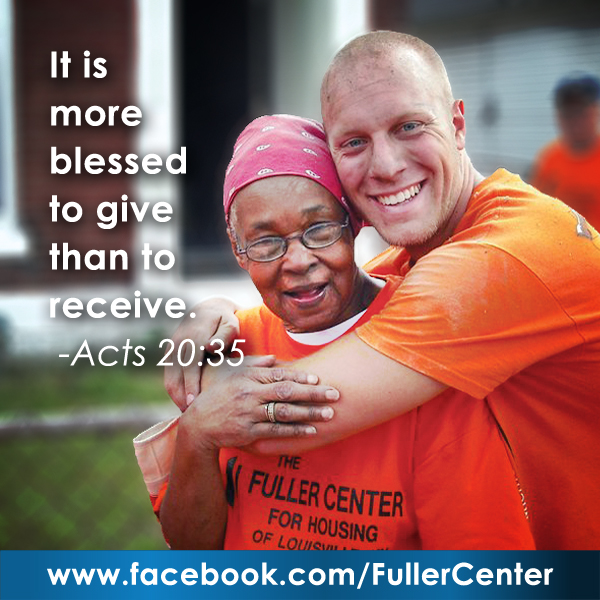 
When Paul was counseling with the leaders of the Ephesian church at Miletus he reminded them of “the words of the Lord Jesus, how he said, ‘It is more blessed to give than to receive’”. A simple statement to be sure, and one that we can all believe in. But, like so much in the Bible, this is one that deserves some thought. It turns out that the process of giving and receiving has some complexity to it, something that The Fuller Center for Housing takes very seriously.

There is giving and then there is giving. In too many cases the act of giving misses the mark and is dangerous to both the giver and the receiver. Gifts that are given with anything other than righteous intent rob the giver of the true joy of the act. And giving without regard to the spiritual and emotional needs of the recipient creates a social imbalance. Too often the act of giving results in the giver ending up somehow superior to the receiver; and while the giver may not even be aware of the fact, aside from a certain smugness that comes from having done a truly good deed, it is not lost on the receiver.

One of the hallmarks of Jesus’ ministry was the dignity that he showed to others. He had a meaningful conversation with the Samaritan woman, remarkable in that she was both a Samaritan and a woman. He saved the woman caught in adultery and treated her with respect and good counsel. Even as he hung suffering on the cross, he comforted the criminals who’d been crucified with him.

Throughout His healing ministry, Jesus did a remarkable thing. He was clearly the instrument through which blindness, palsy, even death was cured. But in nearly every case He turned the responsibility around with the simple statement “Thy faith hath made thee whole”. The recipient of his mercy became a partner in the transaction, dignity intact.

Jesus knew how to give, and when we follow his lead we get better results. From the earliest days of this ministry, back on Koinonia Farm, there has been a conscious effort to retain the dignity of those we serve. This is why we call the recipients of the houses we build and repair ‘partners’. We aren’t a group of high-minded do-gooders looking for a way to feel better about ourselves. We’re a collection of brothers and sisters reaching out to other brothers and sisters in the hope that we’ll all be improved by the engagement.

I’ve been asked how it is that we can charge our homeowner partners for the cost of their new or restored homes. I’ve been told that it’s not Christian to expect such a thing of the ‘poor’. My answer is that it’s probably not Christian not to. We don’t charge interest of the poor, because the Bible says not to, and we don’t make a profit, so our homeowner partners are able to buy the houses on terms they can afford. In the process, though, they have a chance to be part of something that too often the poor miss out on — the opportunity to give, and there is great joy in giving. Fuller Center house payments go into a local Fund for Humanity, from which they are promptly recycled to build and restore more houses. By making their payments, homeowner partners are balancing the social equation; they’re no longer simply receivers, but givers in their own right. Jesus might say to them, “Thy faith, hard work and house payments hath provided thee with a decent home”.

There is much talk these days about who should give and how much, and who’s entitled to what. It’s hard to say where all of this dialogue will lead us, but one thing we know to be true: people esteem more highly those things that they work for than those for which they don’t. People who struggle and prevail have more joy in their lives than those who sit at home and wait. Our goal is the elimination of poverty housing, and we’re committed to making sure that the houses we build and repair are a blessing to those who receive them, folks who then reach out to help others to have the same blessing. It is more blessed to give than to receive, but it’s just as blessed to receive and then give back.

Learn more about The Fuller Center’s work at FullerCenter.org and Facebook.com/FullerCenter