In February 2008, David Snell, the then Vice-President of The Fuller Center was invited to Ghana as part of the access plan to establish our presence in Ghana. He was led by board members to pay a courtesy call to the district chief executive of the Dangme West District of the Greater Accra Region of Ghana. He visited the proposed site for the project at Agomeda, held a meeting with board members and inaugurated the board.

The Fuller Center for Housing was formally launched in Ghana at Agomeda-Shai on Oct. 5, 2008, having gone through the legal registration process. The first three homes were constructed with the start up in Agomeda.

BACKGROUND
Ghana, formerly the Gold Coast and located in West Africa has been described in some quarters as the Gateway of Africa. It covers an area of 92,000 square miles and has a population of 23 million (World Bank, 2005). About 40 percent of the population live below the poverty rate (Ghana Statistics Survey Report). The country practices constitutional democracy and since 1992 has successfully conducted five elections. 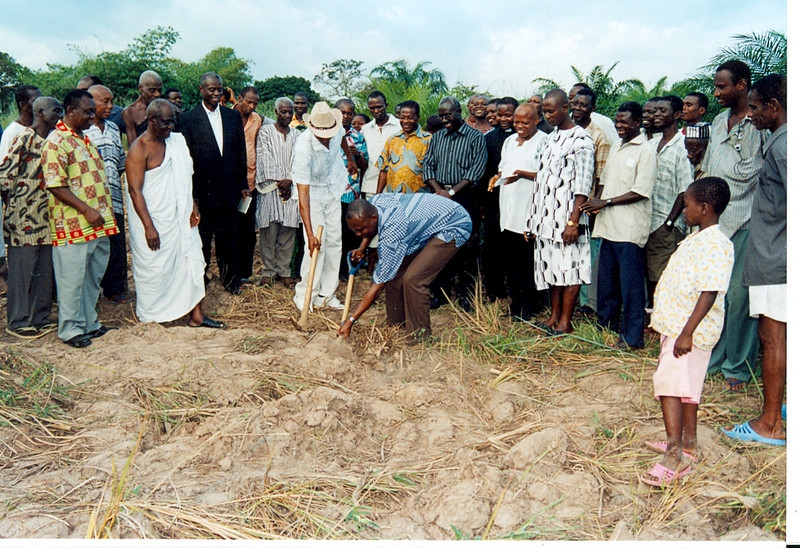 In many ruralcommunities in Ghana, mud houses which once provided shelter for the extended family are crumbling. Poor drainage systems combined with torrential rains destroy mud foundations. Walls collapse, sometimes injuring those standing by. Traditional roofing is of split bamboo or palm leaves thatch which must be replaced frequently to prevent collapse of the entire building. Families still occupying these houses are overcrowded.

There is also a compelling need for accommodation in the urban areas resulting in landlords/landladies taking between two and six years of rent advance. A greater number of urban dwellers who cannot afford the rent advance live in slums or overcrowded houses which lack sanitary conditions.

The Fuller Center Ghana is working and building in Agomeda, Ghana at this time. We use a house design comprised of a porch, living room, two bedrooms, kitchen, toilet and bath that costs about $5,000. To pay back the cost of the house material, each family is given up to eight years at no interest, no profit mortgage agreement.

GOALS
Future plans for the Fuller Center Ghana include partnership with Worker Associations and organized Groups. Plans have been put in place for volunteers worldwide to assist the Ghana program’s growth. The national language is English. People who want to volunteer in Ghana should contact Jones Akoto-Lartey, jakotolartey@yahoo.com for details.