"It’s more blessed to give than to receive."

This common saying might hold a lot of truth, but walking around the Millard Fuller Legacy Build work site this week has lent me a new perspective – that perhaps the two are not totally opposite, but instead intertwine in constant synergy. 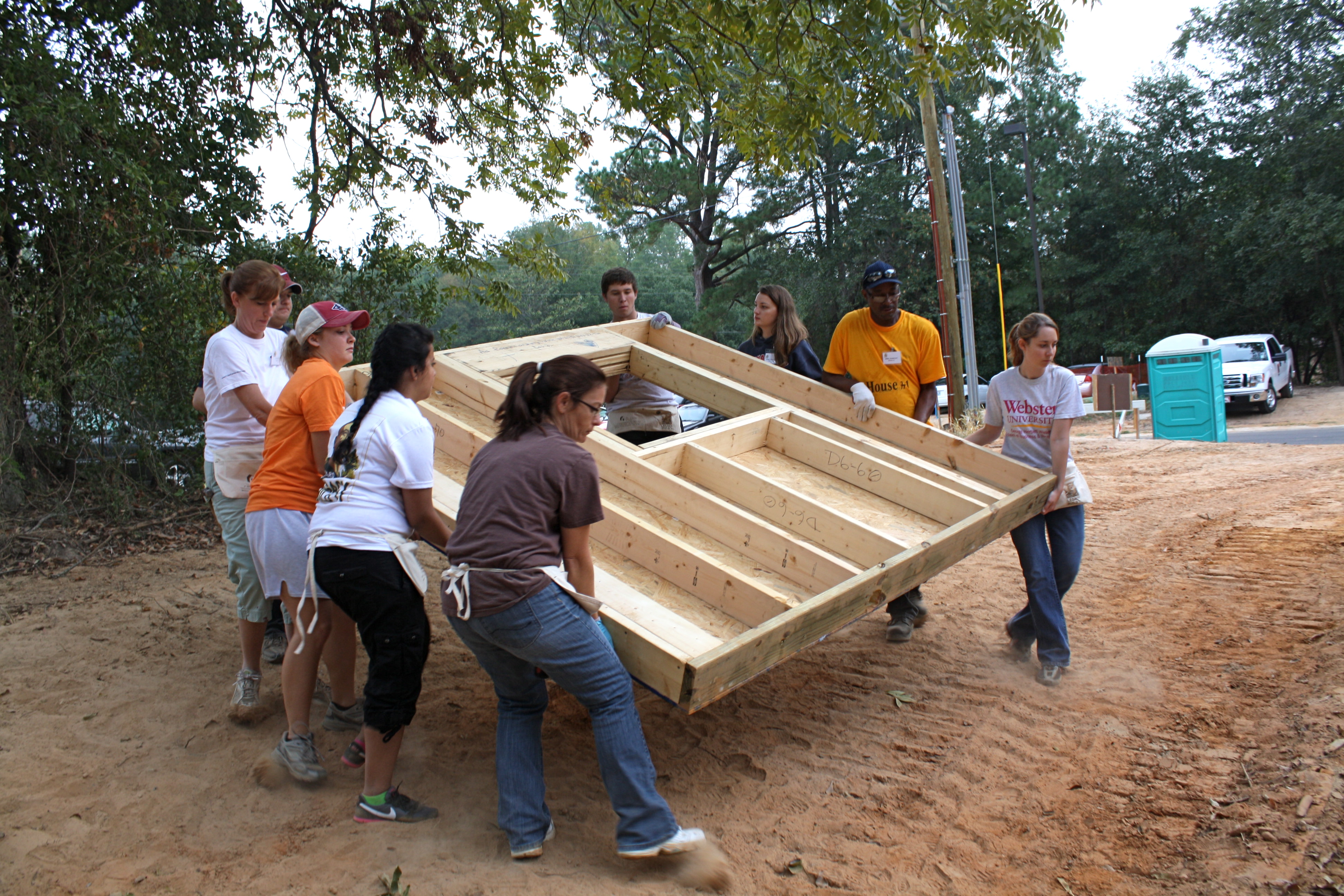 In the space of one month, “Ginger” Virginia Williams, a volunteer here at the Legacy Build in Minden, Louisiana, has been on both ends of the equation.

Williams’ story stretches back to 2008, when her home in Hammond, Louisiana, was severely damaged by Hurricane Gustaf.

For three years, Williams and her husband and three children lived in the tarp-covered home, facing major challenges on a daily basis.

“My youngest son has asthmatic allergies and severe sinus infections, so the mold and the mildew with the damage – it was just impossible to live with sometimes. I went through a gallon of Clorox bleach a day and it seemed like it never kept it at bay,” Williams said. “No matter how hard I cleaned, no matter what I did, it was never clean enough. That was hard, seeing the children have to suffer. It’s hard as a mother. I felt frustrated – I didn’t know what to do, I didn’t know where to go. It was a struggle. It was very much a struggle.”

That struggle lasted until 2011, when Williams called the Louisiana Spirit Helpline, which put her in touch with Tamara Chance Danel, director of the Ginger Ford Northshore Fuller Center for Housing.

“When I met Tamara I felt hope that I lost. It was such a joy to meet her and to see this program – The program is awesome. I appreciate so many things that everyone has done for me. I want to thank everybody that’s had a hand in it,” Williams said. “We walk into our home now and it is just amazing. I have hope that I didn’t have since 2008. It’s just indescribable. I mean, the weight of the world has been completely lifted off me.”

Danel said it was also a joy to work with the family, who put in over 700 sweat equity hours on their new home.

“She and her husband Bubba and their three children were the hardest working family I have ever worked with in the last six years,” she said. “They were in that new house every day doing something … They probably did twice as much as most families because they were so committed and dedicated to the project.”

But perhaps the most rewarding aspect of the project for both the volunteers and the Williams’ family was meeting and getting to know each other.

“There’s so much ministry that goes on, and the relationships that are built and the good things that happen among the volunteers and family members when you’re building a house,” Danel said. “[Ginger] really became passionate about the mission because she understands that it’s not just the house – the house is sort of the byproduct of the ministry. We work together to build a house, but there are so many other good things that come out of it besides that.”

Williams, who moved into the new home with her family at the beginning of October, said one of those good things was a renewed sense of hope, which has inspired her to give back to others. 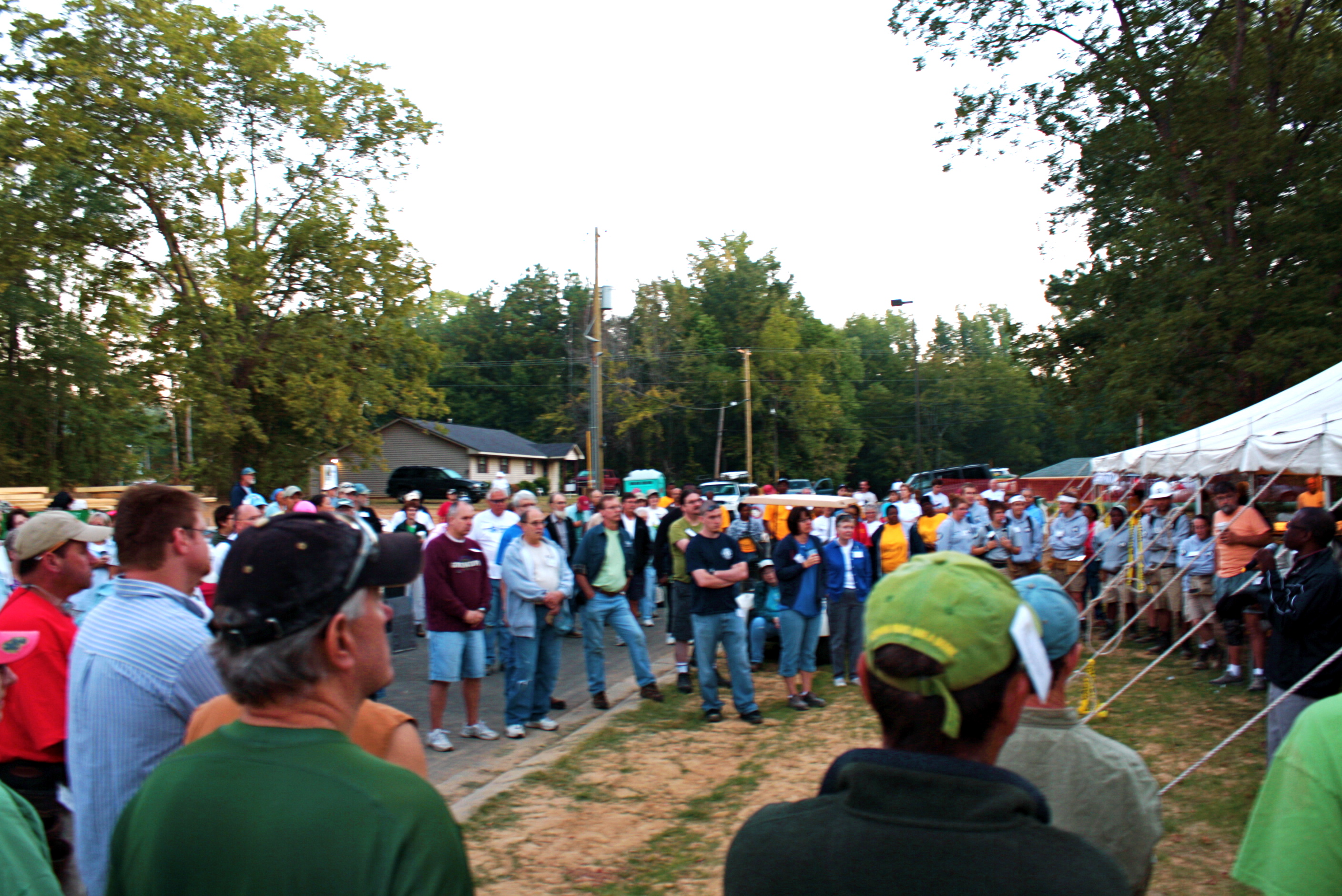 “The only thing I could think about was, ‘Wow, I’m getting a new house.’ But I got so much more than that. I got a new outlook on life, I got a new perspective,” Williams said. My children got a sense of charity and contribution –because they helped build the house. ‘Pay it forward’ is completely our attitude now.”

“I’ll always continue to pay it forward, every chance I get. From volunteering to helping to talking, to whatever I can do. This is just an honor to work for The Fuller Center and to be a part of it. I just want everybody to feel this joy.”

And this week, she’s been putting her newfound joy to action on the worksite, and passing it on to future homeowners.

Nancy Windham, who works as a librarian just north of Minden, is one such future homeowner. Though her new house hasn’t even been started yet, she’s already begun her involvement with The Fuller Center as a volunteer at the Legacy Build.

This role is one she’s comfortable in, as she and her husband volunteered and regularly gave back to their community.

“I’m used to being on the other end of helping people – not being helped. So it’s kind of different for me,” she said. “My husband and I were in the ministry and we would help other people. We’d have Sunday schools and that kind of thing. To be on the other end is new to me and I’m trying to learn how to receive, to be on the other end. It’s hard.”

She and her husband Tracy had been planning to build a new home for ten years – The home in which they had lived in for 18 years and raised their children was now rife with problems.

“I call it ‘London Bridge is falling down’ because it’s an older home … and it’s bad,” she said.

So they saved money, lumber and other building materials, and sketched out plans for the structure. Tracy, who worked in construction, would do much of the building himself. Hope began to grow that their dreams would soon become a reality.

But when Tracy was diagnosed with cancer, the couple had to spend all of their hard-earned money on treatment. Then in 2010, he passed away.

“When he passed away last year, my dreams kind of disappeared. There were no more dreams,” Windham said.

For over a year, she stopped even thinking about building new home as she mourned the loss of her husband.

“Then I met someone who told me about the Fuller Center for Housing. I filled out an application and prayed. The application was accepted and I started getting excited – I said, ‘oh how wonderful, I can still fulfill my dream.’ I can still build a house, even though he’s not here. I can still use some of the materials that we worked so hard for,” she said. “It’s exciting, to still be able to feel that dream.”

Watch a video by Scott Umstattd on Windham’s second chance: