No one could tell a story quite like Millard Fuller — the man whose deep faith and contagious passion for helping others launched a worldwide movement. Then again, Millard never told a story quite like his daughter Georgia tells in the new children’s book “Bobby’s House.” 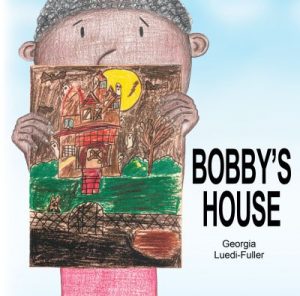 That’s because “Bobby’s House” is a rhyming children’s book written by Georgia Luedi-Fuller with colorful illustrations throughout by Georgia’s talented daughters Sophie and Naomi Luedi. Credit for the cover illustration, meanwhile, goes to Yoselin Hernandez, a student at Smyrna Elementary School in Smyrna, Georgia, who won a contest run by art teacher Sherryl Lane for the honor. Georgia’s mother, Linda Fuller, served as the primary editor of the story.

The paperback’sproceeds benefiting The Fuller Center for Housing’s work of partnering with families around the world to help them have simple, decent places to live. You can order your copy from Amazon at this link ($12.75 plus tax and shipping (shipping is free for Prime members. Or you can order directly from The Fuller Center for Housing at this link for $15 total, including shipping and handling.

Genesis of a children’s book

While the book was officially published this past Monday, Georgia first put pen to paper about 20 years ago while living in a quaint farmhouse in Switzerland. However, the true origins of “Bobby’s House” date all the way back to her own fourth-grade school days at Americus, Georgia’s Cherokee Elementary School. It was there that she encountered a boy she considered a bully. When that little boy’s family moved into a new house with the help of the affordable housing ministry her parents Millard and Linda Fuller started, he was utterly transformed … for the better. Perhaps that little boy might even recognize himself in her new book, for it follows a similar pattern.

“It was a time in my life when it was quiet before I started having kids,” Georgia recalls of being in that little Swiss farmhouse, eagerly awaiting the birth of her first daughter, Sophie. “I don’t know if I was bored or probably just reminiscing about my life and remembering everything I had experienced, but I had always loved the idea of writing children’s books. I had written some plays and musicals, but I’d never written a children’s book.”

It was not just an assemblage of sentences based upon memories. She added flair by infusing it with rhythm and rhyme.

“I had always loved writing poems and lyrics for songs, so I thought it would be fascinating to write the entire book in rhyme,” Georgia says. “I had written an operetta all in rhyme in French in college a couple of years before that, so I thought why not try that in my own language. I think it was just one of those God-inspired things. I just started remembering that transformation from school, and I could find no better theme or subject to do a story on. I just started letting my imagination go. But it was based around a true story.”

As Georgia went on to build a family with her husband Manfred and home-schooled her children, “Bobby’s House” became an afterthought. While she thought the story was worth sharing, the joyous chaos of building a family took precedence over the details and minutiae of book production. Nearly two decades after she first began the story, though, something happened that hammered home just how important it was to have a good home and ultimately brought “Bobby’s House” off the shelf.

Georgia and other family members began to come down with unexplained sicknesses before a mold infestation was discovered in their Jacksonville, Florida home. For two years the family was displaced and often spread apart as the house was gutted and repaired. They are back in the home now, but the work continues.

“We had to evacuate our house and were homeless for six months,” she says. “We went between living in an RV on our property that friends lent us to living at my mom’s house and living with neighbors and church friends. We’re a big family, so we were never able to stay at the same place.”

Having been raised by parents who literally changed millions of lives through their affordable housing ministries, Georgia has always cared about helping people have simple, decent places to live. But her own family’s housing crisis put the issue in a whole new light — and eventually inspired her to give “Bobby’s House” another look.

“It’s the first time that I’ve experienced being on that end of the spectrum — instead of volunteering to help someone in need to actually being the one in need of a decent place to live,” Georgia says. “I realized the devastating and crippling effects not having a good home can have. It hindered us in our productivity and activities and hurt our finances a lot. It just made everything more difficult. It really helped me understand what Dad was talking about when he spoke of how fundamental and foundational a good house is to someone’s well-being and success in life.

“I think this whole house experience became like the fuel for finishing ‘Bobby’s House’ because I developed even more understanding and compassion for people going through something like this or something similar,” she adds. “We’ve completely gutted it on the inside and outside — totally rebuilt it and had it treated and remediated. It’s becoming like a brand new house. With the publishing of ‘Bobby’s House,’ I myself am getting a new house. But as bad as our house situation has been, others are much worse off than we are and need these funds more than we do.”

That is one of the reasons she wants all proceeds to benefit The Fuller Center for Housing, the ministry her parents founded in 2005 as a return to the grass-roots, Christian principles that were inspired by theologian Clarence Jordan at historic Koinonia Farm and then honed by the Fullers themselves from 1973-76 in Zaire before they brought the successful concept back to the United States in 1976.

“I had always had it on my heart to do something to raise money for the ministry,” Georgia says. “Dad taught that it is a responsibility to share our gifts and abilities for the good of others, so that was another motivation to give all profits to The Fuller Center because I wanted to use my creative abilities to help others.”

While her parents inspired her faith and charitable efforts, it was her dad who especially inspired the imagination through his stories. Throughout his life, Millard captivated crowds and congregants alike with his unbridled enthusiasm and deep faith sprinkled with Southern drawl, charm and humor. The Fuller children, though, heard stories from him that no one else did.

“I think it’s definitely a genetic thing,” Georgia says of the storytelling gene. “It was also nurtured. He told us stories when we were little with great animation. I think all of us kids remember his bedtime stories. We always had a choice of whether we wanted a fantastical fairy tale story or a scary story with a wolf. I still remember if we were gutsy enough to get the scary story, we’d wind up hiding under the sheets. Most of the time we picked the nice, fairy tale stories.”

Those creative and storytelling genes continue to get passed down and are visible throughout “Bobby’s House.” Georgia instinctively relied on her mother Linda to serve as editor, but finding an illustrator was a tougher task.

“One of the reasons it took so long to get this book out is I could never find an illustrator,” Georgia says. “I’d tried a couple of different routes, and nothing quite ever worked. And I certainly didn’t feel qualified — I love art, but I wasn’t qualified to do those kinds of illustrations and didn’t even try. It just ended up being an epiphany that I could get Sophie to illustrate them, and it would be so meaningful to have her do it since I was pregnant with her when I was writing the book. I was amazed by her ability.

“I thought that Sophie would be the only illustrator, so it was an extra bonus to have Naomi come in, and she really laid the foundation for the illustrations,” she continues. “This will be the first time that Sophie and Naomi are published as official illustrators, so that’s exciting for them. It’s very meaningful to have them do it with me.”

It also has been a teachable moment for the family.

“Another motivation to finish the book after all these years was to live what I’ve been preaching to our kids about finishing what they start,” Georgia says.

Georgia’s new motivation is to get the book in the hands of as many children as possible. She would love to see funds from the sales support many Fuller Center projects, but more so she believes it’s an inspiring and educational story that children need to hear —  perhaps now more than ever before, including the days to which the story traces its roots.

“I hope they’ll be moved and think of others and want to help others,” she says of young “Bobby’s House” readers. “This generation can be tuned out a little with all the electronics and entertainment. They can maybe not notice what other people are going through instead of judging them. I’d like them to be thoughtful of others and to help in real ways. And I hope they’ll be inspired to support the ministry.”

click here to order “bobby’s house” from AMAZON
($12.75 plus tax and shipping; shipping free for Prime members)
In