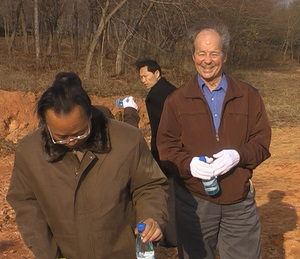 Don Mosley, a leader of a Habitat for Humanity offshoot that’s pushing a person-to-person diplomacy project involving volunteers building housing in North Korea, said Tuesday that he was encouraged by a five-day fundraising swing through the region.

Mosley, a former Peace Corps country director in South Korea and leader of Habitat for Humanity projects in the U.S. and other countries, spoke in Grand Forks and at the Forest River Hutterite colony last week before visiting with potential supporters and volunteers in Manitoba.

The Forest River Hutterite community northwest of Inkster, N.D., has been involved in housing for the poor and international refugee assistance for several decades and is working with Mosley’s Fuller Center for Housing.

Mosley was in North Korea on Nov. 11 as the Georgia-based Fuller Center broke ground on the first part of the project, 50 new homes in a rural community near Pyongyang.

Before coming to Grand Forks, he made a fundraising tour of Pennsylvania, New York and New Jersey, explaining the project and the four years of delicate negotiations it took to win approval from the North Korean government.

“There’s still a minefield ahead of us, but we’re on our way,” Mosley said.

He said he hopes to raise at least $1.25 million by April, when the first group of American volunteers will arrive in North Korea and start working side by side with some of the farmers who lost homes in a 2006 typhoon. Workers in North Korea already have started on site preparation.

The American volunteers will bring sleeping bags and live with the people on site, Mosley said. That’s a concession from the North Korean government, which normally requires all foreign visitors to stay in hotels.

The Americans also gained their hosts’ authorization to profess their Christian faith.

“We told them in our very first meeting that the Fuller Center is a Christian organization and the people who are coming are coming because of their faith,” Mosley said. “We are not coming to preach, but to act on our faith in a way that is mutually dignified.

“If we can accomplish that, maybe we can build trust and work together” on the larger issues that have bedeviled relations between the two countries, such as nuclear weapons technology.

“We’re going to build houses,” Mosley said, “but peace is our ultimate goal.”