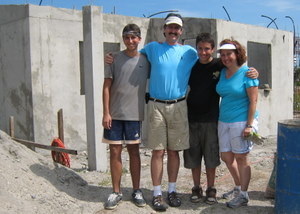 When Dianne Fuller, daughter-in-law to Millard and Linda Fuller, first drove to the Global Builders work site in El Salvador with her volunteer group, she couldn’t keep herself from crying.

“I felt God’s presence with us always, and I knew Millard was there too,” she said.

She served as group leader for a 26-person home-building team made up mostly of fellow members of Highland Hills Baptist Church of Macon, GA, including her husband Chris (Millard and Linda’s son) and their two sons, Ben, 17, and Joshua, 13. She says the experience was life-changing for every volunteer, the youth in particular. The group was in El Salvador June 20-26.

Read about the trip here.

It was an especially moving time for Dianne and her family since she was last in El Salvador building alongside her parents-in-law for the third annual Millard and Linda Fuller Blitz Build 2008. (This year the event has been renamed the Millard Fuller Legacy Build and will take place in Millard’s hometown of Lanett, Ala. to honor his memory.) 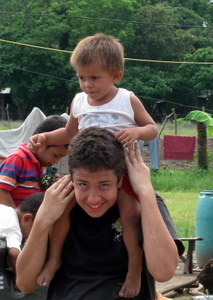 “I don’t think I stopped crying the whole week,” Dianne said. “And by the end of the week, the crying had rubbed off and everyone could cry at the drop of a hat.” The tears must have been cathartic, since nearly everyone involved hopes to return to the village which has now been named Villa Fuller.


Dianne’s group was the largest yet this summer to have traveled for an international build and was also the first to incorporate a newer, more efficient building system. Instead of laying concrete blocks, the cement is mixed and poured straight into forms for the walls.

“It was an amazing sight to see our teenagers on top of the forms, pouring cement and pounding concrete down into the mold with tall re-bar poles,” Dianne said.

The group, which included workers from age 13 to 72, took it upon themselves to not only build a house, but also homes. They added touches like framed photographs of each family in the village and brought along toys and Bibles for the children. Grass was growing so thick and high, it took a four-person team mowing for three days straight to cut it!

“Not only does Villa Fuller look as manicured as Hollywood Boulevard, there is now a nice grassy area to play soccer,” Dianne said.

“My dad would have loved seeing these simple touches because he wanted to build communities and not just houses,” Chris Fuller said.

Sixty houses will eventually be completed in Villa Fuller through the Fuller Center of El Salvador, led by country director, Michael Bonderer. Two of the volunteers from Dianne’s group plan to return with groups of their own in upcoming summers.

“Overall it was an amazing, transformative trip for all the participants,” Dianne said. “We had fun, we worked, and we were blessed beyond expression.”

Check out more pictures of the build here and you can find more information about global builds here.