Find out more about FCH-Armenia 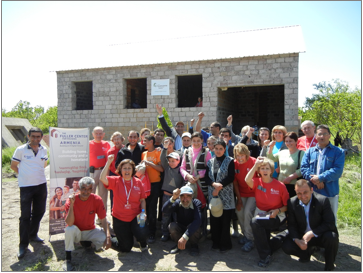 The Fuller Center’s co-founder Linda Fuller, as well as The Fuller Center for Housing’s board chairman LeRoy Troyer, were among the volunteers. Fuller and Troyer continued an eight-year mission, started by The Fuller Center’s founder Millard Fuller, to help low-income families in Armenia acquire homes by providing no profit, no interest long-term mortgages.

The need for adequate housing in Armenia is still tremendous. Many families there live in metal shipping containers called "domics." Others began building a house but were unable to finish after a sudden economic downturn hit in the 1990s. Additional problems often include absestos, leaky roofs, overcrowding, lack of sanitation and lack of heating systems.

“Armenian people have a long history of suffering. They deserve a helping hand and are eager to build decent housing in partnership with and for families in need,” LeRoy Troyer said. “We find that people here are hard working and want to improve their own life in their country.”

Such is the case for the Gyozalyans, just one of the families who will move into a new Fuller Center home. 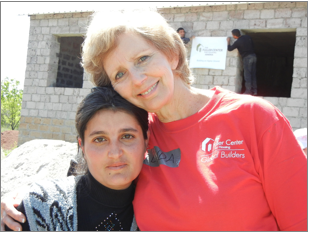 The father of the family began building a home in 2008, but couldn’t complete it due to financial issues. He left for Russia to earn enough income to finish the project. In the meantime, the family lived in a relative’s home.

However, when he unexpectedly lost his life while abroad in Russia, this temporary situation became long-term, and his wife Laura became a widow and single-mother overnight. She sustained the family through farming strawberries and vegetables. Despite her hard work, the income the produce yielded was not sufficient to provide for the children and build a house at the same time.

The Gyozalyans are one of approximately 150 Armenia families for whom The Fuller Center has helped to provide a simple, decent place to live.