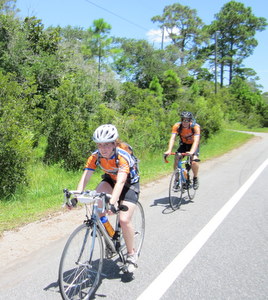 PANAMA CITY BEACH — Their mission is to raise awareness of the need for affordable housing, and a small group of cyclists braved scorching heat Friday as they rode into Panama City Beach.

The riders are taking part in the third annual Fuller Center Bicycle Adventure, a 2,500-mile cross country trip created in 2008 to raise funds for the nonprofit, Georgia-based Fuller Center for Housing.

Millard Fuller founded the center in 2005, almost 30 years after he started the well-known Habitat for Humanity. Like Habitat, the Fuller organization focuses on building and renovating homes across the country for low-income families.

Ivan Cunningham is one of the six volunteer Fuller cyclists riding the entire 2,500 miles this year, a trip that started in Niagara Falls, N.Y., and is scheduled to end in New Orleans.

As he stood inside the Lighthouse to the Nations Church, Cunningham said he volunteered to get the word out about Fuller’s efforts.

“It’s a fight I really believe in,” Cunningham said, after he finished a trek from Eastpoint to Panama City Beach about 12:30 p.m. Friday.

The 2010 Fuller adventure started June 20 in Niagara Falls, with a goal of raising $250,000 for home building and renovating.

According to the organization, the previous two events raised more than $200,000 and were based on long-distance fundraising walks that founders Millard and Linda Fuller led during their years at Habitat.

Fuller staff member Ryan Iafigliola developed the idea for the cross-country bike adventure and rode with the group of cyclists who arrived at the Panama City Beach church. Continue reading>>

Read our blog or learn more about the ride (including next year’s route announcement) here.