When Bahia Vista Mennonite Church of Sarasota, Fla., launched its Community Builders program to renovate and sell homes on the open market to raise money for the church and its work, it was an immediate success.

Sarasota had been hit hard by the foreclosure crisis and had an abundance of vacant homes. The program was an immediate success, but leaders of the program saw that much more could be done with the right partners.

Dennis Bontrager is Minister of Service for the church that has a renewed sense of community involvement under pastor the Rev. Roger Shenk, who grew up in the church but was a worship leader for 17 years in Oregon before being called back to lead Bahia Vista. Bontrager talked to a fellow church member, Ben Sprunger, about growing the program. Sprunger suggested they call upon a man with whom they had both served on the board of Mennonite Economic Development Associates.

That man was LeRoy Troyer, The Fuller Center for Housing’s Chairman of the Board. Troyer made the connection between the church and Fuller Center representatives, and a new covenant partner, the Bahia Vista Community Builders, was born.

“It’s been three and a half years since we hired a younger pastor, 42 years old, who is very much wanting to be more community active,” Bontrager said of Shenk. “We are trying to reach out into the community in different ways. We are very proactive with the younger families in the community. We were more of an older church.” 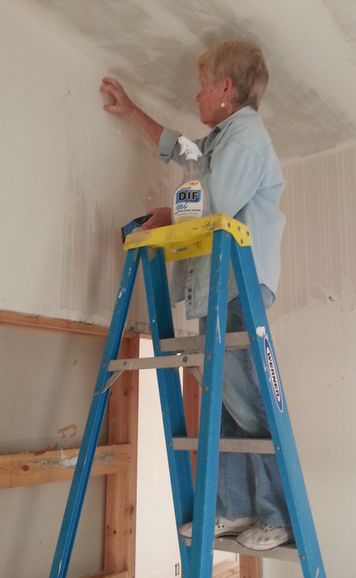 Bahia Vista also is a church with a congregation whose numbers fluctuate seasonally. During the summer, services usually draw about 250 people. But when northerners flock to the Florida sunshine in the winter, about 1,300 pack the church. And Bontrager knew there were many in the congregation who would like to serve outside the church as much as they wanted to play golf and soak up the sun.

“A lot of our volunteers are craftspeople, and they’re looking for things to do,” he said. “I thought, what if we could capture some of their gifts and abilities and use them for something good like that.”

Bontrager said the Sarasota housing market is in transition with a focus on rentals instead of home ownership. He would like to change that with The Fuller Center for Housing’s help.

“Right now (the housing market) seems to be doing quite good,” he said. “As a matter of fact, people are buying up and even companies are buying up a lot of houses that are fairly cheap around this area. They are simply buying them up and taking them off the market and holding them to rent out. I think they’re just going to be using them for rentals. I think the thing that is coming down the pike more is rentals more than people being able to own their own homes.”

He would like to see people move from renting to empowering themselves through home ownership. And he would like to use The Fuller Center’s Greater Blessing program to make the repairs needed to help struggling homeowners maintain their houses.

“I’m not for people buying homes if they can’t afford it, of course, but there are those who do own their own homes but can’t afford to fix them up, and we’re interested in helping them, too,” he said.

“We are delighted to partner with the good folks at Bahia Vista Community Builders,” Fuller Center Director of U.S. Field Operations Kirk Lyman-Barner said. “Our ties go back a long way. We are excited about working with this talented and experienced team with a mission statement that reads ‘to befriend all with the love of Christ through community, worship and service as set forth in the Holy Scriptures and the teachings of Jesus.’”