The Daily You Newswire 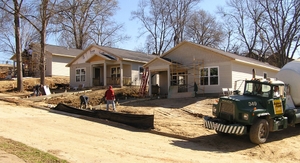 Volunteers from as far away as Idaho and Minnesota will join with local residents to build two new houses in Shreveport in conjunction with the Fifth Anniversary Celebration of The Fuller Center for Housing.

The two houses will be built in the 1400 block of Alston Street in the Allendale neighborhood, continuing a transformation that started in the area shortly after Hurricane Katrina in 2005. When these two homes are completed, The Fuller Center will have built 42 new houses in the neighborhood.

“I would challenge any group or individuals who want to see how partnerships make a difference to come see the changes in this community. This is a great opportunity to give something back to the community and work side by side with other volunteers.”

Volunteers coming to Shreveport for the build include 12 University of Idaho students, 45 University of Minnesota students who will be here March 17 and eight volunteers from Fort Worth, Texas. A volunteer group from Arkansas will come in during the second week of the build.

One of the new homeowners is Yolanda Braziel, a mother of seven who lost her job when the Pierremont Oaks Tennis Club where she worked was damaged by fire. She and her children moved into a family home that had been vacant and in need of many repairs. “This miracle that has been bestowed upon me and my family is emotionally overwhelming,” she said. Continue reading >>

All next week we will be Twitter-ing live from the build–be sure to follow along!