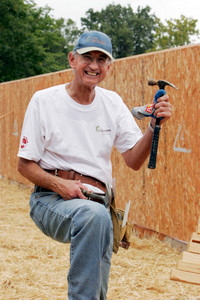 by Allison Kennedy
The Columbus Ledger-Enquirer

Millard Fuller, founder of Habitat for Humanity then The Fuller Center for Housing, will be remembered in Americus on Wednesday on the one-year anniversary of his death.

Linda Fuller, his wife and co-founder of both organizations, will spend Wednesday hanging siding on a Fuller Center home. She’ll be joined by the staff of The Fuller Center headquarters, also in Americus.

Beginning at 8:30 a.m. at the work site, Linda will lead devotions, a daily ritual at the office begun by Millard. The build site is a duplex that the Americus-Sumter Fuller Center is constructing at 910 Elizabeth St.

The home is being sponsored in large part by the $55,000 raised at the "Fuller Center Fish Fry" in November in Americus.

Lunch will be served at the Presbyterian House on the campus of Georgia Southwestern University about noon.

"Building homes is not just good religion. It’s good politics, it’s good sociology, it’s good economics. It’s just plain good common sense," Millard Fuller once said. "That’s the theology of the hammer. People who may not agree on a whole lot else will agree that everybody deserves a simple, decent place to live."