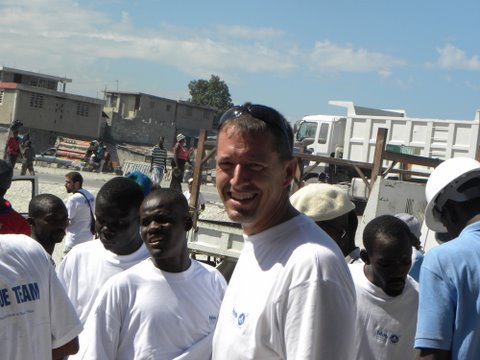 "I was given Sean Penn’s name and made the necessary connections to be on that plane with some Fuller Center people," Bonderer said Tuesday over the phone. He gathered two others to join him–Rob Beckham, a seasoned Fuller Center volunteer and Ruben Durand, an experienced relief worker from France who will help translate.

The three will be traveling with a team of doctors and nurses who speak Creole. They’ll bring and help distribute medical aid and supplies. The Fuller Center team will also work to help establish long-term Fuller Center recovery efforts there.

The team will leave on a jet out of a private airport in Miami early Wednesday morning. Bonderer asked simply for prayers for their travel and the people of Haiti.

Another trip on behalf of The Fuller Center recovery effort is planned for February. At that time AJ Jewell of Orlando, Fla. will bring medical supplies and hopes to make use of tools he already has in a location just outside Port-au-Prince.

"My goal is to help lay the ground work necessary to allow the Fuller Center to begin building homes," Jewell said. "Land acquisition, materials resources and logistics for volunteers are all important elements in getting this recovery underway."

To learn more about The Fuller Center’s commitment to Haiti watch this message from President David Snell.

Donate to the Haiti Recovery efforts. To rebuild a home in Haiti is approximately $3,000.

Or, sign up here to join a Haiti Rebuilding work team.