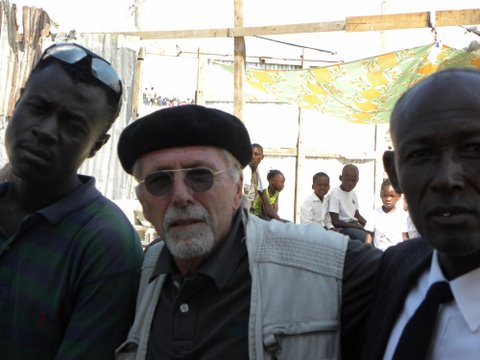 Every day Bonderer saw many of the same things–like thousands of people milling around with no where to go, hoping that water would be available that day–and every day there was a new image, a new face, someone new who needed help.

"Their immediate needs are food and security, temporary shelter and hope," Bonderer said.

After spending two weeks in the earthquake-devastated Haiti, Bonderer, along with regular Fuller Center volunteer Rob Beckham and their companion Ruben Durand (experienced in Creole and disaster relief) are back in the U.S.

Bonderer, Beckham and Durand traveled down Jan. 20 on a private jet chartered by actor Sean Penn. They worked every day in Cite Soleil (just outside of Port-au-Prince). And amidst all the despair, they managed to find some hope.

The Fuller Center group spent time with Penn’s team of doctors who headed to Saint Damien’s, a hospital set up by a Catholic Priest in Haiti, Father Richard Frechette.

"Sometimes in life you are given the opportunity to work with great people. Father Rick Frechette is one of those absolutely great individuals," Beckham wrote in a blog post. He showed them around and helped them navigate the country.

Also on the plane was filmmaker Paul Haggis (best known for writing and directing Hollywood film "Crash") who headed up a project to fix up the street schools damaged during the earthquake so children in the area could continue their education. Haggis quickly returned to the U.S. to begin fundraising and has since collected $5.5 million for the project, according to Bonderer.

Beckham, Bonderer and Durand were put in charge of a school they assessed as salvageable. They were able to hire about 15 men from local gangs to work and by the end of the two weeks the school was ready to be used. 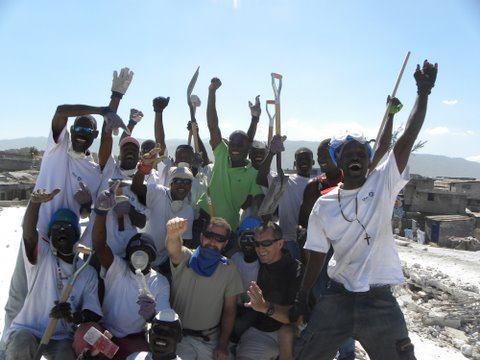 "We got our 15 guys, and we preceded to make a lot of dirt and noise, and cut a lot of steel," Bonderer said. And they finished it. The wonder of accomplishing something postitive was so great they took a moment to pose for a photo (right) and shout a Fuller Center Oyee!

"The ‘Oyee’ was the celebration of completing that mission," Bonderer said. "That’s the first ‘Oyee’ that’s ever happened in Haiti."

Hopefully it was the first of many, once teams of volunteers from The Fuller Center begin to travel there–possibly as early as March–to build homes. And not just temporary homes. Homes that will resist earthquakes, fire and hurricanes.

"The construction in Haiti was so inferior to what we’re used to in the U.S., that that’s part of the problem. We have to rebuild so that doesn’t happen again," Bonderer said.

"One of our hopes is that we can help Haiti leapfrog over temporary shelter and move directly to permanent housing. The system we’re working on is inexpensive, easy to use and results in a solid house. We’re unashamedly pushing for support now so that we will be able to build later," Snell said. "Once the way is open for us, we hope to move in quickly to provide decent, disaster-proof housing with families in need."

Sign up here to express your interest in being part of a volunteer work team to Haiti. (More than 300 have expressed interest so far.)

For other details on The Fuller Center’s recovery effort in Haiti and how to help, visit our Haiti page.